KBC mobile customers to receive loans within one hour of application 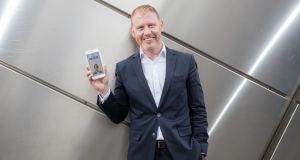 Having made it possible to open a current account in less than five minutes using a selfie to verify your identify, KBC customers will shortly be able to use their mobiles to apply for loans and receive the money in less than an hour.

In addition to being able to obtain personal loans of up to €20,000 in just five simple steps, customers will also be able to use their smartphones to request an overdraft of between €300 and €7,000.

Details about the new service, which is currently in beta mode, were revealed by Eddie Dillon, director of innovation at KBC Bank Ireland, on the sidelines of the Finovate conference in London last week.

KBC was at the event to demonstrate its instant account opening app in association with Google. The tech giant has collaborated with the bank through its application programming interface, which easily allows customers to make mobile payments via the Google Pay service after signing up for a current account via KBC’s app.

The app, which enables users to open a current account and start actively using it in minutes, was introduced last September. Mr Dillon told The Irish Times it had played a key role in helping the company to grow its customer base, with one in five KBC extra current accounts now opened via the app.

Mr Dillon said its new “digital first” service, which enables users to apply for loans and overdrafts without having to fill out paper forms or post documents, will be available to customers in the coming weeks.

“We’re looking to build on the momentum achieved through the instant opening accounts app by offering more products and services,” he said.

“Our ambition is to deliver a real digital alternative to consumers in Ireland and that means being open to partnering with third parties as we have already have with Google, DataIreland and IDScan for the app,” added Mr Dillon.

KBC which recently reaffirmed its commitment to Ireland, is investing €1.5 billion in its digital transformation plan, with a significant part of that spend occurring locally. The bank has more than 60 people working at its innovation hub in Dublin with many of the products and services being tested here expected to be rolled out more widely across the group.

Mr Dillon said that in terms of the technology already rolled out, it was possible to enable customers to apply and receive mortgages in an instant, although he did not expect the bank to roll out such a service.

“We have the technical capability but we need to come to a greater understanding of what ‘instant’ means when it comes to lifetime decisions. Right now we are working to deliver mortgage approval within three hours though,” he said.

Mr Dillon said the bank was also “immersed in any technology that is likely to be either an enabler or disruptor”.

In embracing a digital-first approach, KBC has been actively taking on more traditional banks. But it has plenty of new competition given the recent flood of mobile-only fintech players such as N26 and Revolut into the Irish market.

“Competition is always good as it validates our proposals and raises consumer expectations about different ways of doing things,” said Mr Dillon.