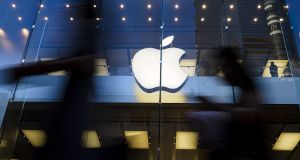 The European Commission found in 2016 that the State had granted state aid to Apple worth up to €13 billion. Photograph: Getty Images

The State has to date paid more than €4.5 million in legal fees relating to its battle with the European Commission over its €13 billion ruling on state aid to tech giant Apple.

Over the past four years about €5.8 million has been paid in fees relating to the case, with legal costs comprising the bulk of that. The remainder includes consultancy fees.

Law firm William Fry has been the best-paid adviser in the case, commanding fees of €2.57 million since 2016.

Barrister Barry Doherty, who has been involved in the case since 2013, has so far received fees of €359,465 for his work.

The European Commission found in 2016 that the State had granted state aid worth €13 billion to Apple. Both Apple and the State are appealing the commission’s decision.

“Notwithstanding this, the Irish authorities have engaged fully with the commission throughout the state aid investigation. This involved a significant degree of legal and technical complexity, and additional expertise has been engaged where required,” he said.

Earlier this month Mr Donohoe confirmed that Apple had transferred €1.5 billion into an Irish escrow account. The Government expects that all of the money will transfer by the end of September, even as both Apple and the State pursue their appeals against the 2016 decision.

Investment firms Goldman Sachs, Amundi and BlackRock had been selected in March to manage the back-taxes and interest as the funds are held in escrow, pending the outcome of the appeals process. The commission said that €13 billion of back taxes was owed between 2013 and 2014, with Apple estimating in its most recent set of financial accounts that the interest bill will come to about €1 billion.

Legal fees relating to the case have been paid by a variety of State agencies including the Revenue Commissioners, the Central Bank, the Attorney General’s office and the Department of Finance.

“As this is an important issue for the State, the case will continue to be resourced as appropriate,” Mr Donohoe said.

Six of the legal advisers involved in the case have received more than €200,000 since 2013, including queen’s counsel Philip Baker, senior counsel Maurice Collins and senior counsel Aoife Goodman. Law firm McCann FitzGerald was the second-highest-earning firm on the list, earning fees of €300,000 over the past two years alone.