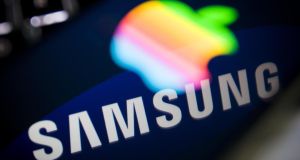 Apple v Samsung: the US tech giant sought about $1 billion from its Korean rival, which argued it should pay only $28 million. Photograph: Jaap Arriens/NurPhoto via Getty

Apple has won $539 million, or about €460 million, from Samsung in the final throes of the companies’ US court struggle over smartphone technology, seven years after the start of a global patent battle.

Apple sought about $1 billion, or about €850 million, in a retrial of a case that originally produced a verdict of that amount in 2012, while Samsung argued it should pay only $28 million this time.

Jurors in federal court in California decided only on damages on Thursday. It was already established that the South Korean company infringed three of Apple’s design patents – covering the rounded corners of its phones, the rim that surrounds the front face, and the grid of icons that users view – and two utility patents, which protect the way something works and is used.

“We believe deeply in the value of design, and our teams work tirelessly to create innovative products that delight our customers,” Apple said in a statement after the verdict. “This case has always been about more than money.”

The basic question for the jury was whether Samsung should have to pay damages based on sales of its smartphones or just their components that infringed the iPhone maker’s patents.

A $1.05 billion jury verdict in 2012 was whittled down by a previous retrial in 2013, along with appeals and adjustments. After Samsung agreed to pay some damages, the case went to the US supreme court in 2016 and was returned to a US district judge with an order to revisit $399 million of that award.

The verdict is a “big win” for Apple, said Michael Risch, a law professor at Villanova University School of Law in Pennsylvania. After the supreme court’s ruling, “Apple’s upside should have been capped at what it won before,” he said. “Beating that number at trial is a huge victory given that the supreme court has theoretically ruled against it.”

That also makes it a “huge loss” for Samsung, “and shows the risk it took by continuing to fight”, he said. “Samsung’s luck with the jury ran out this time, and Apple received a bigger proportion of what it sought.”

Samsung previously paid Apple $548 million, or €467 million – $399 million, or €340 million, for products that infringed the design patents plus more for infringing a utility patent not at issue in the retrial. The damages retrial before the district judge gave Samsung a chance to argue Apple wasn’t entitled to all of its profit from the infringing phones, and recoup at least some of the money. The jury’s damages total will ultimately be calculated against the $399 million Samsung has paid.

Samsung earned $38.9 million in profit each day, or $1.6 million per hour, from sales of its mobile devices based on its most recent quarterly earnings, with a chunk of that coming from sales of its smartphones. That means the single division of the technology giant could pay Apple in about two weeks.

The technology landscape has shifted significantly since the 2012 trial. Apple has expanded its iPhone lineup to include more expensive as well as cheaper models. It’s also revamped the phone’s interface with new icons, colours and gestures. Samsung has added new models with curved screens and iris scanners that Apple has eschewed.

The two companies remain far ahead of the competition globally in phone sales, but Chinese phone makers like Huawei and Oppo have begun to eat into Samsung’s market share while Apple’s has remained fairly steady.

In the first quarter this year, Apple held 16 per cent of the smartphone market, while Samsung accounted for 23 per cent, according to data from IDC. That compares with 30 per cent for Samsung and 19 per cent for Apple in 2012, the year of the original trial.

Although the verdict isn’t significant for either company’s bottom line, Apple has long maintained there’s a bigger principle at stake. After the 2012 jury sided with Apple, its chief executive, Tim Cook, said the lawsuit was about values, and that the company “chose legal action very reluctantly and only after repeatedly asking Samsung to stop copying” its work.

Although the smartphone market is no longer growing, Apple and Samsung will probably remain competitors for decades to come in new categories such as self-driving cars, augmented reality glasses, smart speakers and artificial intelligence software.– Bloomberg