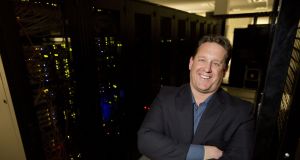 Colm Piercy of Chirisa Investments said there is a “phenomenal need” for data centres in the US. Photograph: Fergal Phillips

An investment group led by Irish entrepreneur Colm Piercy is looking to cash in on “an insatiable demand” for data centres in the United States by developing a $225 million (€192 million) facility in Northern Virginia.

Dublin-based Chirisa Investments had acquired a vacant 26,000sq m (280,000sq ft) building in Ashburn, which it intends to develop it into a 30 megawatt (mw) Tier III data centre to meet what Mr Piercy described as a “phenomenal need for campuses”.

He said the newly-acquired site was bought for cash in an off-market transaction and will be the first of many large-scale data centre campuses the group develops stateside.

The acquisition comes on the back of the group’s participation in an estimated $100 million (€85 million) deal last year to acquire the California-headquartered data centre company, 365 Data Centers. That transaction saw Chirisa acquiring facilities in eight locations in the US with Mr Piercy becoming the firm’s chairman.

Northern Virginia, and in particular, Ashburn, has become a major cluster for data centres with as much as 70 per cent of all US internet traffic estimated to travel through the area.

The demand for data centres comes on the back of increased storage and analysis of data by companies working across multiple industry sectors.

Mr Piercy who founded telecoms company Digiweb in 1997 and is chairman of Dataplex, said Chirisa had a network of financiers “that are interested in what was once seen as an alternative asset class, but is now front and centre and which is driving Grafton Street-style rents”.

“There is an insatiable demand for quality data centre space and a lot of US guys are servicing that from greenfield sites. But where we have found a niche is in taking brownfield sites that can be repurposed to be the sort of cutting-edge facilities that customers increasingly need,” said Mr Piercy.

Chirisa has in recent years been heavily focused on breaking into the US market. To help fund its expansion there the group has divested two major digital infrastructure assets in Europe. These are its Dataplex B10 hyperscale data centre facility in Dublin, which it sold to Keppel DC REIT for €66 million last year, and its Viatel European carrier dark-fiber network and co-location assets, which was acquired by Zayo Group for $102 million (€87 million) in late 2015.