Elearning start-up, which has more than 1,000 customers, named company of the year 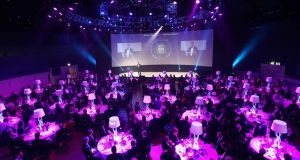 LearnUpon, a fast-growing elearning start-up whose customers include Vauxhall, TripAdvisor, Yokohama Tyres and Twilio, has been named company of the year at the annual Technology Ireland awards in Dublin.

The company was given the prestigious award at an event at the Mansion House on Friday organised by the Ibec-affiliated industry body, which represents more than 200 members.

Founded in 2012 by Brendan Noud and Des Anderson, LearnUpon has developed a cloud-based software platform that helps organisations to train their employees, partners, and customers.

The company, a former participant on the NDRC Launchpad accelerator programme, has more than 1,000 customers globally. Headquartered in Dublin and with offices in Belgrade, Sydney and Philadelphia, it employs more than 70 people.

LearnUpon, which was also shortlisted in the outstanding achievement in international growth category in this year’s awards, was earlier this month ranked in sixth place in the 2018 Deloitte Technology Fast 50 rankings.

The other companies shortlisted for the overall prize at the Technology Ireland awards were Aspire Technology, Cora Systems, ProVision Cameramatics and TDS.

“LearnUpon’s rapid growth has been driven off designing and developing a platform that is quick to set up, easy to use for customers and a platform which can be effectively and rapidly scaled globally,” said Technology Ireland director Una Fitzpatrick.

Now in its 26th year, the annual awards seek to highlight successful entrepreneurship and the diversity of the Irish technology sector.