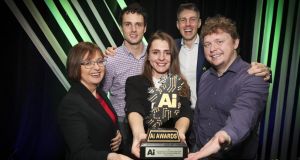 The Cork-based Infant Research Centre has scooped an award for its algorithm that helps detect seizures in newborn babies.

The perinatal research centre won the Best Application of AI in an Academic Research Body category in the inaugural AI Awards, beating competition from Trinity College’s Adapt Centre, Prolego Scientific in UCD, and University of Limerick.

The centre’s researchers created an algorithm that can interpret EEG readings at the same level as a human expert, with the software integrated into existing bedside monitors.

A clinical trial of the algorithm saw it successfully used in hospitals throughout Europe, and work is underway to commercialise the research.

Nuritas took the award for AI in sector. The company uses uses artificial intelligence, deep learning and genomics to predict and provide access to beneficial peptides, or health components, within food.

UCD student Niamh Donnelly was named as winner of the first student AI prize for her project which used convolutional neural networks to improve the accuracy of mapping tree canopy coverage.

The start-up category was won by EdgeTier for its intelligent assistant “Arthur” used in customer contact centres, with McKesson taking home the prize for the Large Enterprise category. In the Consumer /Customer category, Voysis was named winner for its voice AI platform that enables natural language instruction, search and discovery.

The AI Awards were organised by the non-profit AI Ireland, supported by Microsoft, Alldus International, the ADAPT Centre and SAP.

“These awards are a recognition of the advances that are making AI more powerful, impactful and prevalent than ever before, and shows how much of an opportunity it presents,” said Cathriona Hallahan, General Manager, Microsoft Ireland. “I am delighted that Microsoft can support this event which recognises Irish innovation in what is being dubbed the fourth industrial revolution.”

1 Who are Ireland’s 17 billionaires?
2 Are there annual limits on inheritances or gifts to a child?
3 Ryanair wants Irish courts to block Skyscanner from selling its flights
4 Phil Hogan says EU ready to do ‘ambitious’ UK trade deal
5 Tipperary land holding of 800 acres seeking €11m
Real news has value SUBSCRIBE