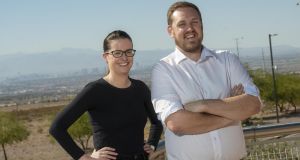 Klir, an Irish-founded compliance start-up for water utilities, has raised $3.1 million (€2.58 million) in a funding round led by a venture capital firm that serves as a feeder for the top VC’s in Silicon Valley.

The company is now headquartered in Toronto, Canada and has large ambitions.

Chief executive David Lynch, who co-founded the business with Elaine Kelly in 2017, is confident that he can build a billion-dollar listed company, given how critical a resource water is.

“I’m a firm believer that water will be the best returning vertical ever. We’re talking about a commodity that is going to get more precious over the years and decades. Those who have the access to data will be king,” he told The Irish Times.

Klir’s technology allows water utilities to easily gather, monitor, and analyse regulatory compliance data in one place. Prior to the company’s formation, authorities relied on software from other industries to cope with increasingly complex problems.

“There is only one Irish Water but in the US you might have 3,000 firms of a similar size and they all have less people and fewer resources but all still a need to issue bills, have the right permits issued, abide by the regulations and so on. We can help them and other authorities with all of this,” said Mr Lynch.

Klir, whose customers include the Southern Nevada Water Authority and Queensland Authority in Australia, previously raised close to €1 million from angel investors.

The company, which has just signed five new enterprise customers, is to use the new financing to expand the team at its new facility in Nevada.

Bowery Capital, Spider Capital and SaaS Ventures led the oversubscribed funding round with Bowery, being well-known as a feeder for leading Silicon Valley VCs who don’t typically invest until a company is more established.

Mr Lynch told The Irish Times there was huge interest from investors, in part due to the area in which Klir is operating but also because the start-up was previously a participant on the Y Combinator programme.

The founders of Airbnb, Stripe, Coinbase, Doordash, Reddit and Dropbox are among those to also participate in the accelerator, which is regarded as the first and best seed accelerator for tech start-ups globally.

“Water represents between 3 and 4 per cent of global GDP and investors are starting to pay much more attention to it having ignored it for a long time because it is a sector seen as one that was lacking in innovation. However, it isn’t just issues of scarcity that are driving change. Even if you’re in a place like Ireland where there is a massive abundance of water there are still issues with it that need to be fixed such as flooding and so on,” he said.

“There are huge opportunities for us globally,” Mr Lynch added.