Apple Fitness+ is finally here. Was it worth the wait?

Review: Apple has taken its time over this, with good results for those in the ecosystem 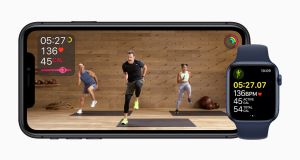 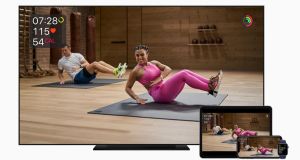 Apple has a very particular approach to things. It doesn’t rush to be the first, but when it does launch a product or service, it tries to add something that will pull in users and make it worth its while. It doesn’t always work out, but the successes are notable.

It’s with this in mind that Apple has launched its own fitness service. Fitness+ isn’t the first to market – in fact, you could argue that it was behind the curve, with the coronavirus pandemic already 10 months old by the time it came to Ireland. Companies such as Fiit, iFit and Peloton have been building on their advantage and growing their businesses with captive markets during lockdown. Apple has a bit of catching-up to do.

But Apple wasn’t being rushed. Fitness+ was announced in September, and the company took its time to get the service right before it unleashed it on the Apple Watch-wearing public.

Because that is exactly who it is aimed at: Apple Watch users. You can work out without one, but unlike other services, you can’t just pair any old fitness tracker or heart rate monitor directly to Fitness+ and still see all your stats. To get the most out of this, you’ll need a Series 3 Apple Watch or newer, along with another Apple device such as an iPhone, iPad or Apple TV to access the workouts.

With the Apple Watch, you get your heart rate and general exercise metrics that most people like to have at the end of their workouts. Plus you get the familiar Apple rings in the corner of the screen that will show you how close you are to closing those rings and completing your activity goals for the day.

Those rings are a key part of Apple Fitness+; in some of the classes, it’s even painted on the wall behind the trainers. There’s an emphasis on closing those rings during sessions, with trainers reminding you of your goal throughout.

The service itself mixes studio classes and new content aimed at outdoor walking. In the studio, you can choose from high-intensity interval training sessions, core work, yoga, strength training, treadmill sessions, spinning workouts, dance and cooldowns. It’s a good variety, with plenty of trainers to choose from, while sessions last 10-45 minutes.

Each session has a playlist that you can add to your Apple Music playlists (assuming you also have that service) for other workouts, or simply when you are relaxing later on.

Favourite workouts can be saved to your list, similar to how Apple Music works. That makes it much easier to find them and repeat your best sessions.

You can share the membership between five family members, each with their own profile. That puts it ahead of some other services, such as Fiit, which don’t allow family profiles. Because it’s linked to your Apple ID, recommendations and progress are is unique to each user.

Apple’s latest addition to the service is the Time to Walk audio content, where you can listen to well-known figures such as Dolly Parton recount stories from their lives as you walk, interspersed with photos that show up on your Apple Watch and a playlist of songs that the subject has chosen. It’s designed for outdoor walking, rather than indoor exercise, but you could probably take it for a jog or work out on a treadmill.

Because it’s Apple focused, you can set up a workout on your iPhone, and then switch to your TV through Apple TV. It’s all very seamless – exactly what you would expect from the Aple ecosystem.

Apple Fitness+ has a couple of things in its favour, not least that its relatively easy to get started, and even easier to pay for through Apple’s subscription service. The variety of workouts is good, with new content added regularly. Plus you can share your Fitness+ membership among your family members, unlike other similar services, making the subscription fee a bit more value for money.

You will need an Apple Watch for the service; there is no separate support for third-party trackers here – it all has to connect to Apple Watch. Plus it lacks some of the compelling features of other services, such as the interactive live classes. Sessions also top out at 45 minutes, so if you want longer workouts you are out of luck – for now.

Apple gives you a month’s free trial if you own an Apple Watch; when you buy a new Apple Watch, you will get three months free before you have to pay up for membership.

For Apple users who want to jump into exercising with minimal fuss, Fitness+ is worth checking out.