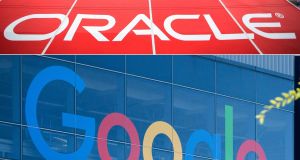 Oracle has sought at least $8 billion in damages in the case against Google. Photograph: Kimihiro Hoshino,Josh Edelson/AFP via Getty Images

The US supreme court appeared divided on Wednesday as it considered whether to protect Alphabet Inc’s Google from a long-running lawsuit by Oracle Corp accusing it of infringing Oracle copyrights to build the Android operating system that runs most of the world’s smartphones.

The shorthanded court, down one justice following last month’s death of Ruth Bader Ginsburg, heard oral arguments in Google’s appeal of a lower court ruling reviving the lawsuit in which Oracle has sought at least $8 billion in damages.

Some of the eight justices expressed concern that Google simply copied Oracle’s software code instead of innovating and creating its own for mobile devices. Others emphasised that siding with Oracle could give software developers too much power with potentially harmful effects on the technology industry.

A jury cleared Google in 2016, but the US court of appeals for the Federal Circuit overturned that decision in 2018, finding that Google’s inclusion of Oracle’s software code in Android was not permissible under US copyright law.

Oracle accused Google of copying thousands of lines of computer code from its popular Java programming language without a license in order to make Android, a competing platform that has harmed Oracle’s business.

Google lawyer Thomas Goldstein told the justices that the disputed Java code should not receive copyright protection because it was the “the only way” to create new programs using the programming language.

“The language only permits us to use those,” Goldstein said.

Chief Justice John Roberts suggested Google still should have paid Oracle for a license to Java.

“Cracking the safe may be the only way to get the money that you want, but that doesn’t mean you can do it,” Roberts said.

Gorsuch asked, “What do we do about the fact that the other competitors, Apple, Microsoft. have, in fact, been able to come up with phones that work just fine without engaging in this kind of copying?”

Oracle and Google, two California-based technology giants with combined annual revenues of about $200 billion, have been feuding since Oracle sued for copyright infringement in 2010 in federal court in San Francisco.

Google has said the shortcut commands it copied into Android do not warrant copyright protection because they help developers write programmes to work across platforms, a key to software innovation.

Some justices expressed concern that siding with Oracle could give software developers too much power by letting them copyright mere methods of organising a system as opposed to something creative or innovative.

“I mean, there are a thousand ways of organising things, which the first person who developed them, you’re saying, could have a copyright and then prevent anybody else from using them,” Justice Elena Kagan told Oracle’s lawyer, Joshua Rosenkranz.

Justice Sonia Sotomayor suggested Oracle was trying to “upend” the software industry’s understanding of which software elements can be copyrighted and which cannot.

“Please explain to me why we should now upend what the industry has viewed as the copyrightable elements,” Sotomayor told Rosenkranz.

Even if the shortcut commands can be copyrighted, Google has said, its use of them was permissible under the “fair use” defence to copyright infringement, which can protect copying that transforms an original copyrighted work. Google has argued that its copying was “undoubtedly transformative” because it resulted in “an entirely new smartphone platform”.

The Federal Circuit in 2018 rejected Google’s defence, saying “a mere change in format (eg, from desktop and laptop computers to smartphones and tablets) is insufficient as a matter of law to qualify as a transformative use.”

A ruling is expected by the end of June. – Reuters