Is spam dead or has it just moved platforms? 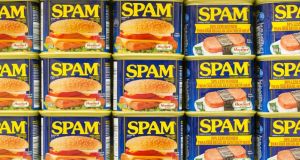 A Monty Python sketch featuring a menu full of spam with a chorus of Vikings singing its praises a la “Spam, Spam, Spamety, Spam” inspired the naming of these unwanted junk emails

On the 40th anniversary of the first ever spam email message we ask: how did spam gets its name and are we actually falling for it anymore or has spam detection and filtering made it a problem of the past?

Spam, as most of us may know, is a brand of processed, canned (mostly) meat. A famous Monty Python sketch featuring a menu full of spam with a chorus of Vikings singing its praises a la “Spam, Spam, Spamety, Spam” inspired the naming of these repetitive and annoying, unwanted junk emails.

Research suggests social media spam is now the bigger problem: people are 10 times more likely to click on a spam message on Twitter than via email. In a large-scale study of Facebook content, it was found that spam begets spams: 97 percent of spam is produced by genuine Facebook accounts that have been compromised or hacked and 70 per cent of this spam is phishing attempts.

As for those more likely to fall for spam, it was found that daily users of social media are almost half as likely to click as infrequent users.

1 In this strangest of recessions, what happens next for Ireland?
2 Chris Johns: Boohoo exposed on pay and conditions in digital economy
3 Hotel bookings collapse in wake of additional Covid restrictions
4 Should I switch bank now with Ulster Bank at risk of closing?
5 ‘Working remotely requires more individual contact, not less’
Real news has value SUBSCRIBE