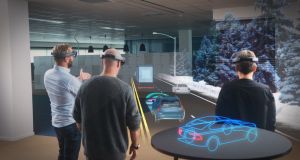 There is a scene in the iconic Tom Cruise film Minority Report where his character navigates a holographic interface using special three-fingered gloves with light sensors. Fifteen years ago, this was an impressive sci-fi vision of the future of computing but suddenly it’s looking a bit dated: “We’re now more advanced than Minority Report because Tom Cruise had to wear gloves; with HoloLens you don’t have to,” says John Savage, co-founder and technical director of Action Point, one of the earliest, if not the first, Irish technology company to begin working with Microsoft’s Augmented Reality (AR) headset.

Savage says Action Point is currently talking to number of multinationals in the manufacturing space about using HoloLens for site surveying and visualising IoT (Internet of Things) data. Action Point’s HoloLens programme would both lessen the cost of and streamline the site surveying process: “Usually a company will employ someone to walk with a very expansive laser data scanner that captures dimensions and other physical data about a site. HoloLens would replace this and help automate the process.”

His company is also working on taking the kind of sensor data that streams off internet connected objects, eg smart pallets in a warehouse, and bringing that data back into the real world to appear in front of a HoloLens-wearing employee. While this is in the early stages, Action Point is meanwhile opening up a proof-of-concept lab and inviting anyone with an idea for a HoloLens application to come in, discuss its feasibility and create an interactive first version.

“We aim to be an enabler for HoloLens for companies in Ireland, the UK and further abroad,” he explains.

Aside from working on applications for Windows Holographic, the operating system that drives HoloLens, Savage has been busy running demonstrations for interested parties at Action Point headquarters in Limerick for the past few months.

“What I love about doing the demos is seeing the wonderment in people’s eyes,” he adds.

Is this something you see with these kinds of headsets in general, Virtual Reality (VR) or otherwise, I ask him. “No, there’s something special about HoloLens: people are expecting a VR experience of being immersed in another world entirely whereas with this headset the virtual world is actually in your world. It’s very hard to tell that it’s not real.”

This is evident in body language when someone is interacting with a hologram, he notes. As you get closer to the hologram, you tend to lean away to give it personal space. I noticed a similar physical reaction to my holographic surroundings when exploring the anatomy lesson created by US HoloLens partner Case Western Reserve University. As I swished my hand through the air and into the virtual cadaver’s internal organs I felt slightly uncomfortable; it’s not something you usually do in polite company.

The realism is created due to HoloLens-generated 3D holographic images obeying the laws of physics: they cast shadows as per room lighting, they are sharply in focus from every angle, and they appear bigger on approach and smaller on retreat. This, coupled with 3D audio, is why Microsoft likes to refer to its technology as Mixed Reality (MR) because it is an almost seamless blend of the physical and virtual. Certainly, more so than the AR experience provided by Pokémon Go, the breakout smartphone game of 2016.

“Although we wouldn’t be here without Pokémon Go,” says Keith Jordan, founder and chief executive of holographic tagging company iTagged. Jordan is referring to how Augmented Reality (AR) has become firmly ensconced in public consciousness as a layering of the real and the virtual following the hugely successful reception of the AR smartphone game by California-based developer Niantic.

Pokémon Go was released in July 2016 and within a few months it had been downloaded more than 500 million times. According to a report by mobile market research firm App Annie, it generated revenues of US$950m (€887m) in 2016, with players having walked more than 8.7 billion kilometres. In other words, it has opened up the AR market for companies like iTagged.

“While VR is great for gaming and simulations, the key thing is that technology like HoloLens is based in the real world so you have the ultimate context when wearing this headset. There could be an IoT layer built in so you can see that your toaster is over-heating or the air-con is a little too cool and needs to be adjusted.”

Jordan sees a clear line of division between VR and AR: “VR is easier to explain but it hasn’t had its breakout moment. AR is a lot harder to get right because of the complex technology involved but, coupled with machine learning, we are going to see a paradigm shift in computing that will take place very quickly.”

What about the good old reliable keyboard? “Voice and gesture will replace the keyboard. Obviously trying to type in fresh air is a bit fatiguing but AI assistants like Siri and Cortana are getting very advanced,” he points out.

It will even replace the TV, says Jordan. HoloLens allows for adjustable screens to hover in your field of vision so it is possible to have a widescreen in front of you, minimise it and flick it to the side while you pop into the kitchen. Or concerts. Technically speaking, an audience of HoloLens wearers could watch the sold-out U2 concert without actually having to be there.

Although in the early stages, and without being able to give much away, Jordan says that iTagged is working with partners in Ireland on its own HoloLens projects. It already has an augmented reality mobile app that allows users to drop location-based tags on buildings and other objects in the real world for followers to see. Moving on from the mobile app, iTagged is looking at developing a voice-activated layer within HoloLens where these information rich tags would appear within your field of vision.

As a fan of Blade Runner (made in 1982, set in 2019), Jordan enthuses about the upcoming release of the remake and how it is coinciding with the technology of the future present that Ridley Scott envisioned: “Soon you’ll be able to walk down the street wearing your AR glasses and all the billboards will be personalised and responsive to what you want to see.”

The wider developer community in Ireland seems poised to embrace HoloLens. James Corbett, founder of VR and AR consulting and research firm SimVirtua, says: “When I first put on the headset I was just blown away.

“Some people have commented that the field of view is narrower than they expected but so what? What you’re looking at in between is just incredible,” he says, pointing out the sheer complexity and computing power of an untethered headset capable of scanning a room to generate an interactive holographic layer. It is also something that will be solved with time, he adds.

“I was comparing it to the first time I tried the Oculus Rift and the first and second developers kit that came with it. I couldn’t help but be excited about those at the time but the HoloLens was a whole step forward.”

Corbett is also not duly concerned by the VR versus AR discussions. He sees them as two sides of the same coin that can be bridged by dialling up or down the opacity of the headset: “Ultimately we will be wearing a single pair of smart lenses in five or six years’ time that will serve both functions. It will no longer make sense to talk about them as two separate things.

So it appears that the market for AR is here and the technology is here. Are there any obstacles? Remember Google Glasses? “The social stigma of wearing a headset will take a long time to go,” says Savage. “Right now, as super cool as HoloLens looks, you’re not going to get away with wearing it down the high-street without being stared at lots.”

This is why Savage thinks that the construction, manufacturing and architecture industries will be where HoloLens flourishes first. One HoloLens partner, international construction solutions firm Trimble, is already using the technology to replace paper blueprints with 3D interactive models that can be shared in real-time.

For now, HoloLens is not a consumer product; it currently ships as a developer or enterprise kit and Microsoft is very clear on this being just the beginning of their MR tech. A lighter, more affordable consumer model will appear as other tech companies join the space with theirs. As impressive as HoloLens is right now, there is a lot more to come.