This week we’re talking about . . . the Nintendo Switch

Is another games revolution on the cards? Mario makers go head to head against mobile 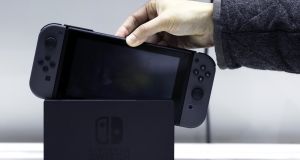 Have you heard of the Nintendo Switch? If not, you soon will.

In case you missed it, the Nintendo Switch is the games company’s follow up to the Nintendo Wii U, which wasn’t the runaway success Nintendo had hoped. Previously known as the NX, the console is a bit of a chameleon: it’s designed as a home console, but you can also use it as a handheld.

Let’s break it down. There are three parts to the Switch: the console, the dock and the Joy-Con controllers. The console can be popped out of the dock, turning it into a touchscreen device. The Joy-Con controllers can slide in on either side when the tablet is out of the dock. When they aren’t attached to the tablet, you can use the two controllers separately, in the same way you would have used the Wii’s remote and nunchuks, transformed into a gamepad using the Joy-Con Grip, or used by individually by two players.

So why are we talking about it?

Nintendo released a bit of information last October, giving games fans a first look at what they were planning. But it was all a bit light on detail. This week, the company let us know a bit more about its plans for the Switch.

There’s also a bit more out there on the specs. The 6.2 inch display is multitouch and runs at 1280x720 in handheld mode; it will display full 1080p graphics when docked and attached to a HDMI cable. It will also have a custom Nvidia Tegra processor, 32GB of memory and the ability to expand that with microSD storage. Games will be on cartridges, similar to the DS.

What isn’t clear, however, is what games will be available at launch. We know the Super Mario Odyssey is coming, but so far only two games are confirmed at launch: Legend of Zelda: Breath of the Wild and 1-2-Switch.

But a handheld games console? Really?

Yes. We can understand the scepticism. Anyone in the portable games market has been badly hit by the popularity of mobile gaming, and as smartphones have become more accessible, the idea of having a separate device for playing games on the go seems a bit quaint.

Mobile games are increasingly powerful, and they’re accessible on almost every smartphone – no extra console needed. That’s a powerful obstacle to overcome.

Having said that, Nintendo’s handheld console is still knocking around in a few forms, including the 2DS that was released in 2013. So that format is far from dead. Yet.

There are still people who want to play on dedicated hardware rather than their mobile phones or tablets – particularly tablets, which haven’t quite taken the place of games devices the way some people predicted they would. That leaves a nice gap for Nintendo to try to wangle its way into.

Nintendo has some great games too – just look at how long Mario has been hanging around – and that might just keep them in the mix. And don’t forget, Nintendo is hedging its bets with a hybrid console.

When can I get it? If I want it, that is

Nintendo is putting the console on sale on March 3rd.