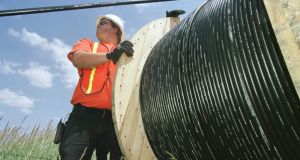 Government is likely to insist on use of fibre, which can deliver speeds of up to 1,000 Mbps, in its national broadband plan. Photograph: Michael Smith/Getty Images

Despite the spread of fibre broadband, wireless technologies are still delivering comparable connectivity in many parts of Ireland.

According to a sample survey of Irish broadband speeds by technology monitoring Ookla group, Virgin Media, a fibre broadband provider, was found to be delivering the fastest download speeds, equating to 276 Megabits per second (Mbps).

Wireless technology firm Imagine was ranked second ahead of fibre rivals Eir, Vodafone and Sky, with an average speed of 77Mbps.

“ Overall, Imagine is delivering faster speeds to the countryside than providers like Eir are delivering to cities and towns, and without using wires or cables,” he said.

Wireless broadband providers risk being driven out of many parts of the market by the arrival of the Government’s national broadband plan.

This is because the three shortlisted bidders for the project – Eir, Siro and E-net – are planning to submit bids based on fibre-to-the-home (FTTH)technologies, considered the gold standard internationally.

However, the final 5 per cent of homes in rural Ireland, located in the hardest-to-reach areas, may still need to be connected using wireless technologies on cost grounds.

Despite the rollout of the FTTH products – Eir and Siro claim to have passed about 40,000 homes each – the take-up by consumers has been low.

Comreg’s latest broadband penetration data shows only a fraction of homes have actually opted to buy FTTH bundles, despite the clamour for better quality connectivity in rural areas.

A recent survey by price comparison website Switcher, however, revealed about a third of Irish broadband connections involved speeds of less than 5Mbps, which is not even classified as broadband in the US because of the limited functions that can be conducted.

The Government’s national broadband plan aims to bridge the digital divide in one leap by building a high-speed network across rural Ireland using the latest technologies.

1 Who are Ireland’s 17 billionaires?
2 My father in a nursing home wants to gift me his house
3 Nama lends Cosgraves €15m to fund huge apartment development
4 Property firm sues engineering company over waterproofing of basement
5 Why has the pension age question suddenly become an election issue?
Real news has value SUBSCRIBE