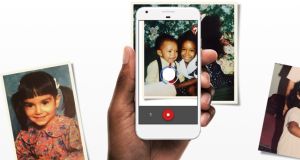 Don’t throw away that box of old Polaroids just yet

PhotoScan by Google Photos is ostensibly an app that scans your old photos, converting them to digital format so that you don’t have to keep physical copies. I wouldn’t, however, dump the shoebox of yellowing Polaroids just yet.

This smartphone app works as simply as pointing it at a photo and hitting the Scan button. What happens next is that four white dots appear at corners of the image; moving the scan button around to hover over these dots turns them blue and you’re done. This is supposed to calibrate and get rid of glare but after several tries it didn’t work for me. The only thing that helped reduce glare was turning off the flash (the app automatically switches it on).

I also found that the scanned images weren’t as crisp as my original primary school photo (just as well given the scarily poufy early ’90s hairstyles). If you’re looking to convert a cache of old family photos, it remains best to use a professional service.