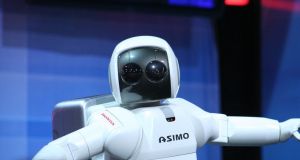 The European Parliament’s legal affairs committee has passed a report calling for, among a number of AI-related recommendations, the creation of a European agency for robotics and AI that will overlook the ethical, legal and social implications of the presence of this ever advancing technology in citizens’ lives.

Report author Mady Delvaux suggests the creation of a specific legal status for robots “so that at least the most sophisticated autonomous robots could be established as having the status of electronic persons with specific rights and obligations”.

These rights and obligations would include the robot claiming responsibility for any damage it causes and the recognition of “electronic personality” of particularly advanced autonomous AIs.

The report also recommends the introduction of a robotics licence for designers that includes an integrated kill switch (in case all hell breaks loose). It has also clearly learned a lesson from TV show Humans where synthetic humans, or synths, are distinguishable from real people: designers “should ensure that robots are identifiable as robots when interacting with humans”.