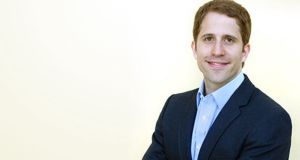 European head of Salesforce Ventures Alex Kayyal: in Dublin to attend SaaStock, a “software as a service” conference for venture capitalists, founders and executives

The start-up ecosystem in Europe has been growing at an impressive rate, according to Alex Kayyal, European head of Salesforce Ventures.

In Dublin to attend SaaStock, a “software as a service” conference for venture capitalists, founders and executives, this week, he says there has been “remarkable growth” in the area of technology start-ups in Ireland.

“We have seen a lot of innovation and new start-ups being created here,” Kayyal says. That there is now a dedicated conference in Europe and that it is in Dublin “is a reflection of the ecosystem and how it has grown,” he adds.

Salesforce started investing in technology start-ups in 2009 and now has 180 companies in its portfolio, making it the third most active corporate investor globally.

The company decided in 2015 to look more to Europe and set up a $100 million fund to invest in cloud computing companies.

In Ireland, Salesforce has invested in cloud computing company Datahug and is keen to “meet the next generation of enterprise innovation,” says Kayyal.

He says it is important to get people in the Irish technology sector thinking about innovating and creating start-ups rather than going for the traditional companies.

There are three things that make a successful ecosystem for start-ups, he explains – access to capital, access to talent and a community of partners. “When I look at the ecosystems here, in all three areas, there is a lot of momentum.”

The start-up sector here is “has been going on for a long time, it is not new,” he says and this is helpful for investors coming in. There does need to be strong community support, for people to learn from each other and he says this is happening.

One area where Europe in general was lagging behind for a number of years was on the access to capital, Kayyal notes. That was why Salesforce initially looked to start investing in Europe, but that “has definitely improved”.

This creates a “velocity in the ecosystem”, he says. If the company is sold, not only the investors but also the early employees and founders often go on to invest themselves.

Salesforce says it is selective about the companies in which they invest. “It is really around where the fit is for us, we are really selective on what are the businesses that are good for us,” says Kayyal.

“Ultimately what we get excited about is investing in entrepreneurs going after a very big market with a disruptive idea and an amazing team to go and win in that market,” he adds.

Kayyal says he would encourage businesses to reach out to them if they are “growing a very disruptive business at the early days”.