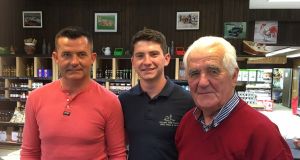 David, Cillian and Eddie Sexton of Kildare Farms Foods, which stands on 140 acres in Rathmuck, Co Kildare, and employs more than 60 people.

Kildare Farm Foods is a thriving family business and farm, now in its fourth generation, which has moved and diversified with the times.

Originally a Land Commission holding of only 22 acres, the farm was grown with dairy cows in the 1970s by Eddie and Sinéad Sexton. Their son David Sexton, one of six siblings, is now at the helm of the business which these days stands on 140 acres in Rathmuck, Co Kildare, and employs more than 60 local people. Sexton’s sister Gillian O’Neill is involved and works on the food export arm of the business.

Eddie Sexton is still very active and happily shows locals and his own grandchildren the ropes.

In the 1970s, the then 49-acre farm carried a mix of dairy cattle and rearing pigs. “At this time, loans were at 21 per cent with the banks but we had to buy more land, stock and equipment to survive.”

As cows went dry in winter he decided to keep 100 turkeys and the following year they held 1,000. A few years later, the number had risen to 4,500. He recalls calling on all the local children to come in and get pocket money as the turkeys had to be plucked by hand.

In 1993, David Sexton, then only 17 years old, went on a mission to the Netherlands and France to source high-yielding Holstein Friesians, which proved a great success. But the turkey business was also hugely profitable and, with so many companies in the hospitality business looking for suppliers, they were badly bitten a few times.

“We had experienced a sting in the early 1980s when two different factories went into liquidation,” Eddie recalls. “I was asked by the bank manager: ‘Did you ever think that you were an easy target’ and it taught me a lesson.”

Twenty years on and David Sexton was faced with a similar situation when the company accumulated bad debts of more than €600,000. With a degree in accounting, the younger Sexton used his business acumen to claw back the money without continuing to supply and this, he believes, helped the business to survive the last recession.

“I have a good nose for knowing what to do and, as the supply business slackened, we developed the sale of farm foods in the shop,” he says. “We only opened on a Saturday to start. Then one day a little girl was crying because she had brought carrots to feed the pony in the field and this gave me the idea to open a farm so that families would come and visit.”

Sexton had heard an advert on the radio for the free museum at Newbridge Silverware close by and it was a great way to get people into the shop to buy their products.

“So we decided to do something similar and it mushroomed from there. We now have a coffee shop, crazy golf, small train, and host children’s birthday parties. School groups are also welcome and, at Christmas, Santa holds visits with free gifts for every girl and boy who comes to see him.”

The farm is a cornucopia of delights for children, with exotic animals ranging from wallabys and ostriches. Two camels, recently acquired in the Netherlands. have been christened Donald and Hillary.

As well as the turkey business – Kildare Country Turkeys – Kildare Farm Foods provides Aberdeen Angus beef and exports it around the world. They also started breeding race horses 26 years ago when the family was involved in show jumping. The stud has had great success and has bred winners at Royal Ascot among other prestigious races internationally.

What are now five key areas of business are growing but three years ago Sexton decided to diversify once more, and bought an island close to Achill to grow organic stock. Duvillaun Beg is home to organic lamb which will be the produce of another subsidiary, Wild Atlantic Foods.

With the business only 11 weeks in operation, its produce is already in demand from the top end of the food-supply market.

Exporting local produce to the Middle East and Muslim community means ensuring all animals are Halal prepared and Kildare Farm Foods is fully certified to do so. It is a known consigner of the DAA, making it easier to ship goods through Dublin Airport.

“We designed special packaging to keep the foods fresh in transit. Smurfit used to make it but now it is made in the UK. Since Brexit, prices have actually fallen from the supplier.”

A lot of luck is involved in running a food business and also hard work. But, with grandson and nephew Cillian at the checkout in the shop, the business is already in the hands of the next generation.