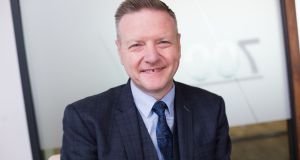 Uform chairman Eamon Donnelly: “We see ourselves as more of a Google type of environment.”

The business of creating a kitchen has changed since Eamon Donnelly founded Uform in 1993 in Toomebridge, Co Antrim, with brother Paul and late father Eddie.

And what has changed most is the focus on individual components – such as handles, worktops and lighting – says the chairman of Uform, a kitchen supply firm.

“Twenty-four years ago, none of that choice was there. It was bog standard. The kitchen has become the heart of the home; it’s a living space,” he said.

Kitchen fashion is changing every eight to nine years, he says, with customers spending £7,000 on average in the UK and €9,000 in Ireland.

Uform distributes more than 1,000 kitchens a week from a factory in Toomebridge.

Uform’s best customer is the over-50s generation, buying through consumer brand Kitchen Stori. “Two-thirds of our market is Generation X. Those are people who are building extensions or fitting replacement kitchens after they move to new properties,” he said.

“The makeover TV programmes have a huge influence. There are more top-shelf magazines than there have ever been. Primarily, it comes down to two categories: a flat door in gloss or matte or a timber door in grain or smooth,” he said.

Uform has seen turnover grow from just over £8 million to £22 million in four years. It’s the culmination of a plan which saw the Co Antrim site hire 40 more staff.

Next on the agenda is the launch of 24 new kitchen ranges, the installation of additional polishing and painting lines and building a warehouse to accommodate new products.

Eamon, Paul and managing director Simon Oliphant plan to spend £4.5 million and hire 50 people by the end of 2020.

As of now, 168 people work at the Uform site in Toomebridge. There is another site with 72 employees in Fahan, Co Donegal, under the name An Doras.

Uform products are sold through consumer brand Kitchen Stori to independent retailers and to consumers on kitchenstori.com.

“If you go into a retailer as Joe Public, retailers will hopefully present our brochure to you and do a fact find of what you want. They act as the consultant matching your needs with our brochure.

“Most of them will manufacture or outsource their cabinets and buy the frontals from Uform. They will outsource the worktops, the lighting. They then project manage that through to the installation and the fitting,” said Eamon.

Uform’s suppliers are based in Italy. “They have the supply chain right through from owning the forest, felling the tree and manufacture the product, whether it’s timber or their own medium-density fibreboard.”

The design is created by the Uform in-house team before the product is manufactured under licence in Italy or in splinter companies in Slovenia and Romania. It is then marketed at home in Antrim.

“One thing that’s contributed to our growth is our ability to paint kitchen doors in any colour that someone wants. We put the key selling colours on the shelf, which is available next day to anyone in the UK and Ireland. We also offer any colour that anybody wants under the sun with a 10-day lead time. Lead times are usually between four and six weeks,” he said.

Eamon started selling kitchens when he was 17, before going on to the local college of further education to do a diploma in business studies.

He started a company in 1987, which he later sold to start the new business. There is now a third director, Simon Oliphant, who has a 5 per cent share in the business. Eamon and brother Paul have 47.5 per cent each.

“Simon has grown up with the business over the last 12 years. He joined the company as a senior procurement manager and then became a managing director two years ago.

“We see ourselves as more of a Google type of environment. We try and develop our people from a capability point of view and recruiting the people that are aligned to the culture of business,” he said.

This financial year, Uform is on target to deliver sales of £30 million, said Eamon. Growth in the last quarter was up 31 per cent compared with the same period last year.

In 2004, the company moved to a new, state-of-the-art premises in time for the recession to kick in, when “gearing went completely wrong”.

Their method of survival was to dramatically consolidate the products on offer.

“What I learned was to concentrate on your core competence of finishing doors, and keep your stock as fluid as possible with as many different options as possible,” said Eamon.