Siro to use Chinese firm’s fibre-optic tech to provide 500,000 homes with 1GB broadband 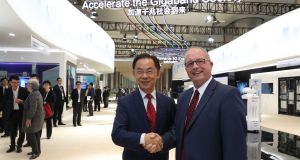 ESB and Vodafone joint venture Siro, which recently walked away from the Government’s National Broadband Plan bidding process, has signed a €25 million deal with Huawei for its fibre-optic technology.

The company intends to roll out the Chinese company’s equipment as part of its fibre-to-the-building (FTTB) broadband network, which will provide 500,000 homes and businesses in 50 towns with a 1GB service.

Siro previously partnered with Huawei on its pilot in Cavan town in 2015 and is also the build partner for the rollout of fibre broadband services to more than 8,000 homes and businesses in Athlone, Co Westmeath.

The joint venture is investing €450 million in building a nationwide FTTB network.

“This contract is an important milestone in providing best in class, 100 per cent fibre-optic broadband to consumers and businesses in Irish towns,” said Siro chief executive Sean Atkinson.

“With over 100,000 homes passed and very encouraging early take-up rates, Siro is meeting the demand of Irish homes and businesses for a new communications network for the 21st century. The Huawei technology is a key component to deliver a service to customers that is quite literally the speed of light,” he added.

Siro last month dropped out of the Government’s broadband plan leaving just Eir and Enet in the procurement race. The company said it was withdrawing as there was no longer a “business case” for its continued participation.

The withdrawal came months after the Government controversially removed 300,000 homes from its original plan and placed them back into Eir’s commercial rollout plan.

1 How long can Government afford to keep State pension age at 66?
2 Supermarkets gear up for winter lockdown
3 Black Friday has become Black November for Irish retailers
4 Gadgets to help keep your home safer this winter
5 Ikea seeks to build a new version of itself
Real news has value SUBSCRIBE