Irish managers not up to speed with digital revolution 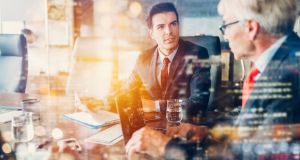 The KingramRed report on the state of digital transformation in Ireland 2017 found a majority of the participants still believed responsibility for going digital lay below CEO level with IT departments. Photograph: iStockphoto

Businesses in Ireland are “struggling to transform to meet the challenges and opportunities presented by the digital revolution”. That’s according to the 2017 KingramRed Digital Transformation Report. In the second report of its kind by the digital management consultancy, which included a wide range of Irish organisations across a variety of sectors, it was found “boards and senior management are not developing a vision of their digital future [and] leadership capabilities and awareness are not sufficiently developed in this area to drive direction and mitigate risks”.

Less than half of the organisations surveyed had established any formal vision for the future in terms of maintaining competitiveness in a digital world.

Only 53 per cent even recognised there was any urgency to change.

The biggest take-home from the report, however, was that a significant majority of participants still believed responsibility for going digital lay below CEO level with IT departments. Over 60 per cent of those surveyed on management and board levels believed it was not a priority issue for the top levels – an oversight which has resulted in efforts to prepare for the looming digital transformation frequently becoming “dissipated in silos across organisations”.

The report, which included input from Irish organisations working in finance, logistics, agriculture, food and beverage, measured companies’ awareness/use of current and emerging technologies such as AI, data analytics, robotics, algorithms and the Internet of Things (IoT).

Big data and analytics were far and away the most predominant technology already in use by organisations in Ireland, with “65 per cent already engaged and a further 20 per cent expecting to take advantage within two years”.

Robotics was one of the lowest technologies in terms of early adoption by firms, with “almost 30 per cent of organisations either actively investigating or imminently planning to assess robotic solutions”.

According to the report, “the shortage of resources and skills is a serious challenge to driving forward with change. This tallies with the responses that, despite the fact that 72 per cent are investing in digital skills, only half of organisations believe that they have the skills and resources (both internally and externally) that they need to manage their digital initiatives.”