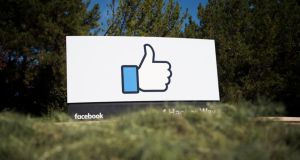 Facebook is the last of the top five US tech companies to report quarterly earnings. Photograph: AFP

Facebook reported a 76.6 per cent surge in quarterly profit on Wednesday, fuelled by robust growth in its mobile ad business.

Mobile ad revenue accounted for 85 per cent of the company’s total advertising revenue of $7.86 billion (€7.2 billion) in the first quarter ended March 31st, compared with 82 per cent a year earlier.

Analysts on average had expected total ad revenue of $7.68 billion, according to financial data and analytics firm FactSet.

The social media giant is expected to generate $31.94 billion in mobile ad revenue globally in 2017, a 42.1 per cent jump from a year earlier, according to research firm eMarketer.

Facebook is the last of the top five US tech companies to report quarterly earnings.

“A great quarter, but what comes next?” asked Rob Sanderson, analyst at MKM Partners. “We’re just kind of in this wait-and-see mode in terms of the impact on the business. We don’t know how much ad load has driven growth.”

Facebook in the past few years has depended on its social network – a mobile-advertising machine – to fund investments in other areas, which are much less developed as businesses. The company spun off its Messenger chat tool as a separate app in 2014, and just this year started testing advertising on it, alongside bot functions that let businesses reach consumers.

Facebook’s work with Instagram is seen as proof that it can replicate its main network’s success in advertising on other properties. Instagram, now with 700 million users, has started adding to revenue growth. The company has also benefited as more advertisers purchase video ads.

The group employs some 1,600 at its international headquarters in Dublin, and is said to be preparing to double that after taking additional office space in the capital. It is also developing a data centre in Co Meath. – (Reuters/Bloomberg)