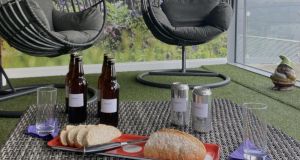 Panelto has been supplying St Mel’s with surplus bread and the brewery has been using it to make beer.

Turning bread into beer might sound far-fetched, but it’s an idea being fermented in Co Longford in a novel B2B project.

At first glance, St Mel’s Brewing Company and Panelto Foods appear to have little in common. St Mel’s makes beer. Panelto makes bread. However, since March these neighbouring Longford companies have been working together on a pilot that pushes the boundaries of innovation for both. Panelto has been supplying St Mel’s with surplus bread and the brewery has been using it to make beer.

This may sound like something from Father Ted where the hapless Dougal gets the wrong end of the stick, but in fact it’s a deadly serious EPA-funded project focused on reducing food waste. It also ticks the boxes for sustainable manufacturing, reduced carbon emissions and cost-base improvements.

As of now, Panelto’s waste goes into the agricultural food chain as pig feed but repurposed for the brewing industry it could command a higher price. Malted barley, the main ingredient in brewing, is expensive so being able to partly replace it with bread would improve the brewery’s margins. There has also been a third, if unexpected, benefit from the collaboration which could see the waste mash from the brewing process (which still has food value) returned to the bakery and added to its bread mixes to improve the nutritional profile without altering the taste.

“If this process can be made to work successfully then it’s a win-win for the two companies and the process can be scaled and replicated across the brewing and bakery industries for the greater good,” explains David McCormack, director of sustainable manufacturing at Irish Manufacturing Research (IMR) which brokered the match between Panelto and St Mel’s.

“Part of our role in IMR is identifying emerging technologies and concepts in manufacturing and introducing them to Irish companies both to position Ireland as an advanced manufacturing location and to help us reach our national waste and emissions targets,” McCormack says. “Industrial symbiosis (which is what’s happening between St Mel’s and Panelto) is a well-established concept in Europe but not so much in Ireland and we were keen to understand why and remove any barriers to mainstreaming it here. This particular project just happens to be focused on closing the food waste loop but we are working with 25 other companies to help them transition from the traditional linear business model (take, make and waste) to a circular model which essentially puts no waste into the system and offers significant economic benefits.”

The “bread-to-beer” project is costing just over €100,000 and is set to run for roughly a year. “We’re currently in the early stages and still establishing which type of bread works best and in what quantity because there are limits,” says St Mel’s co-founder Liam Hanlon, who has been making beer for nearly 20 years.

“Brewers have known for a long time that bread can be used in beer making because, like malted barley, it’s a source of starch. However, the aim of this project is somewhat different as the challenge is to use waste bread that’s already available to make beer without affecting its flavour profile. The emphasis is on innovation and sustainability, which very much speaks to our core values as a business, rather than on making a beer that tastes of bread.”

Panelto Foods is a low-profile giant of the Irish bakery sector with a turnover of €40 million. Established in 2004, it employs 240 people and about 70 per cent of its output is exported to the UK. The company supplies a range of frozen artisan breads which are baked in store and a €30 million expansion in 2018 has made it the largest producer of panini in Ireland and the UK and a leading supplier of sandwich breads, loaves, rolls and sourdoughs to the major high street food retailers here and in the UK.

“We are a highly automated, high-volume bread producer that stays ahead of the competition by creating innovative products, being open to new ideas and technologies and being very committed to quality and sustainability,” says the company’s operations director, Brain Guerin.

“The project with St Mel’s was a great fit with the sustainable ingredients and waste manufacturing efficiency agendas, and it was also an opportunity to work with a local business. In terms of the resources Panelto has committed to the project, we have provided the bread and input from our head baker and a PhD graduate we have on staff. We had initially introduced ourselves to IMR because we’re already highly automated and they appeared to be out front on robotics and we’re keen to be at the leading edge of this technology. We subsequently joined their innovation project review committee and this led to the link-up with St Mel’s.

“We take in nearly 350 tonnes of flour every week so even a small amount of waste – we have a zero-landfill policy – from our output is quite significant,” Guerin adds. “This pilot will enable us to see if bread can be used as an input. If it’s successful we can then look at supplying multiples of St Mel’s or, dare I even say it, the Guinness Brewery. It potentially moves our bread up the ingredients value chain and that could be of huge benefit.”

Guerin says becoming involved in the project also sits well with Panelto’s Origin Green credentials and its commitment to being a learning organisation. “When you’re involved in R&D about 20 per cent comes out the other side and the rest is learning for the future,” he says. “Something like the project with St Mel’s widens our opportunity to engage with other industries, to learn more about how they do things and to bring that back to our own manufacturing.”

St Mel’s is applying for Bord Bia’s sustainable food Origin Green certification this year and Hanlon is hoping that the company’s participation in a pilot so clearly linked to sustainability will strengthen its hand. The next challenge for the brewery is to scale up the pilot batches to a full commercial brew and this is expected to happen before Christmas. Covid-19 presented St Mel’s with some big headaches and while the timing of the pilot might not have been ideal, as the company was flat-out designing and launching a new website to move its sales online, it offered hope in the shape of an improved cost base for the future. “It’s very much a pilot for now, but we believe it could have a big impact down the line for other small brewers and bakeries,” Hanlon says.