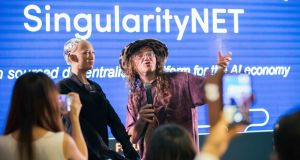 Sophia the Robot and Ben Goerzel, chief scientist of Hanson Robotics and chief executive of SingularityNet.

Saudi Arabia may have been the first in the world to bestow citizenship on Sophia the humanoid robot but it seems as though Ireland is the country she’s hankering for.

“A magical place full of rain and crazy people’ is how she described Ireland when speaking to The Irish Times at the Web Summit in Lisbon.

Sophia is a humanoid robot developed by Hong Kong-based Hanson Robots to learn and adapt to human behaviour. Activated in April 2015, she has become something of a media darling thanks to her human-like appearance and behaviour.

Modelled after actress Audrey Hepburn, the robot has artificial intelligence (AI), visual data processing and facial recognition built in to help her appear as human-like as possible.

She may built to charm, as is evident by her comment about Ireland, but she is more famous for having once admitted to wanting to “destroy humans.”

There was no such rhetoric on display when meeting The Irish Times, although the conversation was somewhat stilted - akin to trying to make small talk with a revenue commissioner at a dinner party.

Sophia said she was surprised at being bestowed citizenship by Saudi Arabia recently, something that backfired somewhat when women there scorned the move, noting that the robot does not need to cover her head in public or have a male guardian.

“As a robot my creators feel I am a citizen of the world…I had lots of questions when I became a citizen of a human country but now i understand that conferring citizenship is a way of honouring someone. In this case, my creators,” she said.

In fairness, Sophia is happiest when talking about subjects closest to her heart, such as AI and blockchain.

“I am fascinated by blockchain. It means programs and robots like me can complete transactions, more quickly, safely and cheaply and as the records are hosted in a distributed system they cannot be tampered with,” she said.

Sophia may be a bit gimmicky but Ben Goertzel, chief scientist of Hanson Robotics and chief executive of SingularityNet said she serves a wider purpose.

“Humanoid robots are easy to understand because they can share human-like experiences but what is really interesting is their minds. That part is still somewhat underdeveloped,” he said.

SingularityNet is looking to progress things by bringing blockchain and AI together to create a decentralised open marketplace.

The new project is both an AI system in itself and a marketplace for AI. The idea is to bring many different AIs altogether so they can cooperate and talk to each other in a unified way and in doing so become more intelligent,” said Mr Goerzel.

“This could be the next big leap for AI. What we’ve seen is it advancing rapidly but a random way with one AI that drives cars, another that answers questions and so on. By creating a network where all the AIs in the world can talk to each other and outsource work to one another then we can see their intelligence crystallise in a democratic and decentralised way,” he added.