Cantillon: Apple’s new phone is creating a buzz, but its Face ID is raising privacy issues 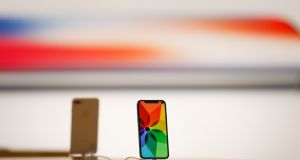 The first reviews are in and it looks to be a general thumbs-up for Apple’s new eye-wateringly expensive iPhone X.

In fairness, with so many fanboys and fangirls, it was unlikely to ever be a negative reception. However, while the latest iPhone certainly has plenty of wow, one of its key new features is causing a bit of a commotion.

So excited is Apple by the feature that it has done away with the Touch ID fingerprint sensor, leaving users with little choice but to use Face ID unless they want to resort to typing in the regular six-digit PIN password like some kind of animal. This wouldn’t matter if Face ID worked, of course, but unfortunately many early reviewers struggled to get it to work properly.

Ultimately, this is more an irritation than a major problem, but one other issue arising from the Face ID feature could be.

Privacy experts have expressed concern after it emerged recently that software developers will be able to access data related to the facial technology while building apps.

“The privacy issues around of the use of very sophisticated facial recognition technology for unlocking the phone have been overblown,” Jay Stanley, a senior policy analyst with the American Civil Liberties Union told Reuters earlier this week. “The real privacy issues have to do with the access by third-party developers.”

He’s right, of course. While Face ID sounds great, the idea of leaving data open to exploitation by people unknown is something that should make even the biggest Apple fan concerned.