The three biggest takeaways from CES 2020

‘Big tech inside’, ‘big data’ and ‘mobility’ stand out at consumer tech show 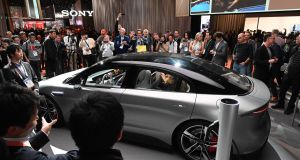 Behind all the glitz and the hype, the Consumer Electronics Show is a good place to spot some of the biggest trends shaping the tech industry. Here are three that stood out this week.

First, “Big Tech inside” has become a powerful force in the personal tech world - to the discomfort of some of the consumer electronics companies that have been forced to align their own strategies around those of the tech giants.

Since Amazon and Google battled to plant their voice-activated assistants in as many gadgets as possible, the software and services of some of the biggest tech companies have become important animating forces in consumer tech. This year, this was evident from gadgets such as light bulbs hooked up to Apple’s HomeKit smart home platform (from Sengled) and the iPhone-linked toothbrush that tracks your brushing habits (Oral-B).

Amazon, meanwhile, is taking the strategy it developed for Alexa and using it to advance its smart-TV ambitions. Its Fire TV is now embedded in other companies’ TV soundbars, which might be shaping up to become important digital hubs in the living room. Roku, the leading independent provider of smart-TV software, has come up with a similar strategy.

Supplying the software - and being the first screen viewers see when they turn on a device - should give these companies a leg up as streaming video services spread beyond the TV. Netflix and Disney may have the most impressive libraries of content, but where are the hardware strategies to keep them front and centre in a world of ‘video everywhere’?

Meanwhile, the tensions caused by Big Tech’s burgeoning ambitions spilled over into acrimony. High-end speaker company Sonos used the opening day of CES to sue Google over alleged patent infringement. Sonos’ speakers have been a vehicle for Google’s streaming music service and digital assistant. But that bargain is clearly not working out to Sonos’ satisfaction, leading it to break with an important partner as it accused Google of using its muscle unfairly to suck up consumer data.

A second trend underlined at this year’s CES is that “big data” trumps privacy. Lapses like those found in Amazon’s Ring doorbell served this week to highlight the privacy and security risks in smart home technology. But using personal data to make digital gadgets and services smarter is now an important force in all corners of consumer tech.

The collapse in the cost of cameras, for instance, has put digital eyes everywhere. Vision can now be embedded in hearing aids that watch who you are talking to (OrCam), a yellow ball that follows you around the home and tries to anticipate your needs (Samsung) and a self-propelling suitcase (Ovis).

The emergence of health and wellness as driving forces for personal tech has given new impetus to the personal data revolution. As Matt Parry, a Walmart executive involved in that company’s development of in-store health clinics, put it: “Customers are desperate for us to connect the dots.” That means using what it knows about them to inform healthier buying decisions, with “a big data solution to help them live their lives”.

The third trend on view in Las Vegas this week has been the depth of the identity crisis that has hit the auto industry. Toyota openly admitted that it had no idea where its long-term future lay. “Mobility”, the word carmakers use these days to describe the point of their industry in a future where autonomous robotaxis hold sway, suggests that personal transport will become an undifferentiated utility.

Toyota presented a vision in which cars were reduced to bland pods shuttling people around a smart city. If this is only one element in a bigger urban system, then Toyota has followed the thought to its logical conclusion: it says it will start construction next year on a test city to help shape its future strategy.

In a fitting counterpoint to Toyota’s identity crisis, Sony made the centrepiece of its appearance at CES a car. It has no intention of actually producing the full working prototype of an electric car that it wheeled out. The point, instead, lies in the 33 Sony sensors inside and outside the vehicle, and its immersive information and entertainment systems.

The message: in the electric car future, the vehicle itself will be little more than a lump of metal on wheels. Instead, it is the intelligence and the digital experiences that will comprise the soul of this new machine.

With only 3 per cent of the current market for image sensors in cars, Sony has a long way to go to show that it can transform itself into an important strategic supplier to the auto industry, let alone subsume traditional carmakers with its wider vision. But like other consumer tech powers grasping for a new purpose, it knows that the future will require some serious reimagining. – Copyright The Financial Times Limited 2020