Israel seeks to become the Promised Land for foreign investors

Israel attracted a record $21.8 billion of foreign direct investment in 2018 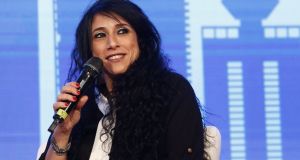 Ziva Eger, chief executive of Israel’s Foreign Investment and Industrial Co-operation Authority: ‘Israel is different to Ireland. We don’t feel that competition so much. Ireland has the market [the European Union] but it does not have the technology level that we have.’

As IDA Ireland this week announced another record year of job wins for the State, its chief executive Martin Shanahan acknowledged that stiffer competition is emerging from eastern Europe. But it doesn’t stop there.

Across the far side of the Mediterranean Sea, another small, plucky, tech-focused nation fancies its chances against Ireland and other European states in the battle to scoop up mobile foreign investment.

Israel is fired up for the competition, if the enthusiasm of Shanahan’s counterpart there, Ziva Eger, is anything to by.

Eger, the on-message chief executive of Israel’s Foreign Investment and Industrial Co-operation Authority, which operates as Invest in Israel, also illustrates the uniqueness of the Jewish state, even in its approach to business.

Sometimes it is frustrating when a company decides to go elsewhere. But Israel is different to Ireland

While former hotelier Shanahan came to his IDA role via an orthodox route through the old State business advisory group Forfas, Eger joined Israel’s investment ecosystem from the army.

In Israel, her route would be the orthodox one. The Israeli military is one of those institutions that binds this incredibly complex society together – with the exception of most Arab-Israelis and ultra-religious Haredi Jews, almost everyone in Israel does three years of national service before university.

Many complete their service in the Israel Defence Forces, the regular army. Eger stayed in the army for 17 years, retiring six years ago at the rank of colonel. She now has overall responsibility for attracting multinationals to set up in the country, where society is dominated by security concerns that appear, as of yet, to have done little to deter foreign investors.

Among the long-standing big names operating in the country are car company Daimler-Benz and the pharma group Merck.

Ireland and Israel both fancy themselves as high-tech hubs. Occasionally, they go head-to-head for investment, such as last year, when Intel plumped for Leixlip over central Israeli town Kiryat Gat for a new $4 billion chip manufacturing facility.

As she addresses an international delegation of journalists assembled by the Europe Israel Press Association, which also funded the trip,  in a hotel off Tel Aviv’s beachfront, Eger allows herself a wry smile at the memory of losing out to Shanahan’s team for the Intel investment.*

“Sometimes it is frustrating when a company decides to go elsewhere,” she says, diplomatically. Then she recovers her verve: “But Israel is different to Ireland. We don’t feel that competition so much. Ireland has the market [the European Union] but it does not have the technology level that we have.”

While Ireland has carved out a niche for itself as the European home from home for US technology giants, the Republic’s domestic start-up scene has always underperformed in comparison.

Israel, meanwhile, has successfully branded itself as the start-up nation. Much of its technical innovation originates from military inventions, which then leak out into the wider economy. This domestic technological nous gives it an edge when it comes to touting for foreign investment.

Eger illustrates the civilianisation of Israeli military technology with a story you hear in Israel again and again. A pair of Israelis who had worked on lens technology for missiles teamed up together after their military service. Trading as Given Imaging, they miniaturised the lens technology so that they could fit a camera into a conventional pill, the Pillcam. Patients swallow the pill so that it can take images of their insides without the need for invasive surgery.

Then there is the army. Eger, as a former high-ranking officer, highlights the benefits of military service, including the networks it creates between people

“I swallowed the Pillcam myself and it took pictures of everything in there,” says Eger. “Then the doctors called me back in [to retrieve the images]. I had to wear an overcoat on my way there because there was a recording device attached to me.”

Given Imaging was eventually subsumed into Covidien, which, coincidentally, is now ultimately headquartered in Dublin.

With its military acting as a seedbed for all manner of new technologies, research and development (R&D) is a huge part of the Israeli economy. It spends 4.3 per cent of its GDP on R&D, versus an OECD average of 2.4 per cent.

The relentless focus at home on developing technology is a major plus for Israel when it seeks out FDI.

The obsession with developing new technologies to solve some of Israel’s most pressing issues – including the provision of energy, water and security – has tempted many multinationals from Europe to its shores to set up R&D centres.

Eger says that of the near 400 multinationals operating in the country, about 140 are from Europe. Of these, about 80 have opened Israeli research centres.

There are 300,000 tech workers in Israel. Almost 40 per cent of them are working on or facilitating some sort of R&D, while multinationals account for half of all Israeli R&D expenditure.

Among the industry clusters that Israel has established – through foreign investment and also from indigenous start-ups – are medical devices, also a focus for Ireland, and automotive technologies. Israel is home to a swathe of motoring technologies, although the country has never produced a single car.

Like Ireland, Israel is also working to tempt multinationals to shift intellectual property to Israel. Under its “Innovation Box” set of IP incentives, the income tax is between 6 per cent and 12 per cent. There is a mere 4 per cent tax on dividends; and the capital gains tax on exit is between 6 per cent and 12 per cent, depending on the size of the investment. Eger notes that those benefits are available for 10 years.

Less than an hour away from Tel Aviv’s beachfront lie the high-rise offices of the Israel Innovation Authority (IIA), set among the hills on the outskirts of Jerusalem. Its chief executive, former Apple executive Aharon Aharon.

“There is huge competition with Ireland and with other countries,” he says. “But our secret sauce is that we are a small country and everyone talks to everyone.”

A dozen multinationals opened new research centres in Israel in 2018, according to IIA figures.

As with Ireland, Israel’s success in attracting foreign investors, especially those engaging in R&D, has created some capacity problems. According to Naomi Krieger Carmy, IIA’s vice president for societal challenges, Israel is short about 15,000 software engineers.

Economist Dan Catarivas is now director of the Division of Foreign Trade and International Relations at the Manufacturers’ Association of Israel. For years before that, he was a state trade adviser, and also worked on the economic side of the peace process with the Palestinians. He jokes that Israel has always had economic challenges

“When it came to Israel, Moses spent 40 years in the desert to find the only place in the Middle East without oil,” he says. Israel has since solved its energy problems, including with solar power, which heats the water in more than 90 per cent of Israeli homes. It has also solved its water shortage problems. About 80 per cent of the water used in the country is recuperated in some way or desalinated.

Catarivas also highlights that there is a “problem of wealth distribution” in Israel; he also warns that its productivity is slipping; and there is a housing crisis in Tel Aviv.

Then there is the army. Eger, as a former high-ranking officer, highlights the benefits of military service, including the networks it creates between people who may later go on to do business together.

But the fact that most of its young people are taken out of economic circulation, right when they should be entering the workforce or college, also must have an economic impact.

It isn’t as big an economic problem as it could be, argues Catarivas. “Doing national service, our young people learn teamwork, They learn discipline. We take a disadvantage and we try to get the best out of it.”