Huawei to create 100 Irish jobs over next three years 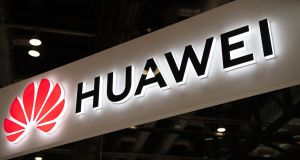 Huawei first established operations in the Republic in 2004 with just four employees. It now employs 180, of whom more than half are focused on R&D.

Huawei has announced plans to create 100 jobs over the next three years as it continues to expand in the Republic.

The company said it has already begun recruiting staff with 30 positions expected to be filled within the next 12 months.

The jobs announcement was made by rotating chairman Guo Ping while on a visit to open the company’s new offices in Dublin.

It comes just months after the Chinese company revealed plans to invest €70 million in research and development (R&D) locally over the next three years. This is in addition to the €35 million invested here by Huawei since 2015.

Located in Mespil Court, the Dublin office occupies 18,000sq ft with the operation including communications, administration and marketing, as well as the group’s consumer business and related sales functions.

Huawei first established operations in the Republic in 2004 with just four employees. It now employs 180, of whom more than half are focused on R&D.

“The business in Ireland has significantly grown and as we have grown, so too has Ireland. We appreciate the trust and support of our customers and individual consumers along the journey,” said Mr Guo.

“Ireland has an open economy and a highly-skilled talent pool and today’s announcement of 100 jobs and the opening of a new Dublin office will drive our long-term investment and co-operation focus here,” he added.

While initially focused on manufacturing phone switches, the company has significantly expanded its business over the years to include building infrastructure equipment used in mobile and broadband internet networks, including for 5G. It is now also the world’s second-largest smartphone seller behind Samsung.

Huawei has been in the spotlight of late after being blacklisted by the United States on national security grounds. The group has consistently denied allegations that its equipment can be used to spy on other countries and/or companies.

1 How well paid do you think you are? Here’s how to work it out
2 Life as a Facebook moderator: ‘People are awful. This is what my job has taught me’
3 Public could face extra charge for electricity under green subsidy scheme
4 AIB to sell more than 500 ATMs to Brink’s
5 Wealthy investors’ legal challenge against Revenue fails
Real news has value SUBSCRIBE