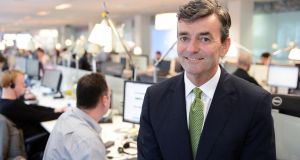 Irish-based mobile top-up company Ding is to open an office in London and increase its staff numbers “significantly” at its Dublin office as it continues to grow its brand.

Ding expects to have 10 people in the London office to start with, with that rising to about 30 within six months. The roles will be in marketing and analytics, roles that are currently carried out in Dublin. However, that does not mean the Dublin office will be scaled back; although it will become less of a hub, there is talk of adding more engineers to the Irish team. Ding is also looking for additional office space in the city.

The company currently employs 150 in Ireland, but founder Mark Roden said he expects to add 30 to 50 people in the next six months, many of whom would be in Dublin. Part of the reason for opening the London office is to tap into the talent that may not be available in Dublin, although Ding said it would go “toe to toe” with bigger tech companies for talent in Ireland.

“The one thing that technology companies have is they can’t get enough good talent. In order for us to address that, we’re giving ourselves optionality on roles,” Roden said. “So roles are now advertised both in London and Dublin at the same time.”

Despite Brexit casting a shadow over many businesses operating in the UK, Roden doesn’t think the UK’s exit from the European Union will negatively impact the business.

“For us, the decision to locate in London is all about people and talent, not so much for serving the UK market but as a platform for serving the rest of the world. That’s one priority. So it’s not really impacted by Brexit,” he said. “The only impact could be is if, for example, that, as part of policies introduced, a lot of European talent decides not to locate in to London. But with the wealth of talent already there we don’t envisage that being a problem.”

London isn’t the only target for expansion. Ding has a regional offices around the world, including Dubai, and recently opened an office in Moscow. Despite being based in Dublin, Ding is not targeting the Irish market. Its main markets currently are Central America, the Caribbean and countries such as India and Pakistan.

Roden described the company’s growth strategy as “multi-phase”, including not only the geographic expansion but also other content Ding can bring into the business through partnerships. The company already has an extensive network of partners with mobile networks and retailers included.

The original concept for Ding was around people sending credit to other people’s phones, a market that the company estimated to be worth about $20 billion (€18.1 billion). But as the mobile industry has evolved and moved towards data-heavy smartphones, the company has also found its business model shifting. A larger potential market is in people putting value on to their own phones, which could be worth $400 billion, Ding said.

“When Ding started and when the business was growing, it was all about phone calls, holding the phone to the ear,” said Roden. “Now it’s much more about looking at the phone, and that means consumption of data. So data plans have overtaken calls. We are staggered by the amount of demand for people to get value on to the phone to consume data and services.”

Ding isn’t ruling taking on growth capital in the future, although Roden said it wasn’t currently an avenue Ding was pursuing. The company had considered a multimillion-euro equity raise and spoke of the possibilities to The Irish Times last year, but Roden said they ultimately chose to go with debt financing. That allowed the company to strengthen its team before any potential capital raise in the future.

“I think that’s the right order, which is: people first, then strategy, and then we look at what funding is required,” he said.

1 Covid-19: Westport braces for tough times ahead
2 Economy could have relatively rapid recovery from Covid-19
3 An Post sees big jump in people opening new current accounts
4 Think you’re bad at video-conferencing? Boris Johnson is worse
5 Why the State should give us all gift vouchers, let's call them Paschalbonds
Real news has value SUBSCRIBE