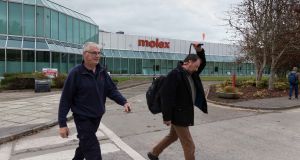 Staff leaving at Molex plant in Shannon on Tuesday. Its impending closure was ‘a global decision made on the basis that 75% of the product they manufacture in the Shannon plant is at end of life’. Photograph: Eamon Ward

US multinational Molex has announced the closure of its Irish subsidiary in Shannon with the loss of up to 500 jobs in a major blow to the region.

The company, one of the largest employers in the midwest, manufactures electronic and plastic components for a range of industries. It relies heavily on international sales and particularly on US trade with China, which is the subject of a damaging trade war.

The Illinois-based group said that, following a review of the product lines manufactured at its Irish facility, it had made the decision to close the plant by the end of 2020. The closure will take place in a series of phases, starting early next year.

The company said the majority of products made at its Shannon plant had “insufficient financial returns and growth potential”.

“Therefore, these products will either be exited or divested, with any remaining products transferred to other Molex facilities,” it said in a statement to staff this afternoon.

“The impact of this decision will regrettably result in the closure of the facility impacting up to 500 employees,” said the company.

“Announcing our intention to close this facility is very difficult due to its impact on our employees, and the deep ties Molex has with the region and its people having operated in Shannon since 1971,” it said.

The closure represents the worst jobs blow in the Republic since 2017, when Hewlett Packard cut 500 jobs at its Leixlip plant Co Kildare as part of the closure of its global print business.

Established nearly 50 years ago, Shannon was Molex’s first European facility and has been a linchpin of the local economy. Most of the staff are from the midwest region.

IDA Ireland said it would work with the company to market the Shannon site to potential investors. “Securing investment for Clare and the midwest region is a continuing priority for IDA Ireland,” it said.

Minister for Business Heather Humphreys said she was bitterly disappointed by the news. “ My immediate thoughts are with the workers and their families at what is a very difficult time for them and for the wider Shannon area,” she said.

Ms Humphreys said she had spoken with the company’s chief executive who had expressed his deep regret at the decision.

“He unfortunately made clear that, while the decision was made very reluctantly, it is irreversible,” she said, and “explained it was a global decision made on the basis that 75 per cent of the product they manufacture in the Shannon plant is at end of life”.

In 2013, Molex was acquired by US conglomerate Koch Industries for $7.2 billion. About one-third of its revenue is understood to come from sales to China.

Koch Industries, which has been restructuring its businesses in the face of a global downturn in trade, has been outspoken about the damaging impact of US president Donald Trump’s tit-for-tat trade war with China on its Molex business.

“Molex must now pay significant additional tariffs on US imports from China, as well as any products it exports to China from the US,” said the parent company recently. “Those costs must be passed on to the consumers who buy new smart phones, vehicles, appliances or rely on advanced medical equipment.”

Molex has been laying off employees at various locations in the US as part of the global restructuring.

Two other Irish plants owned by Molex in Sligo and Donegal, which make medical devices, are not affected by the Shannon decision,