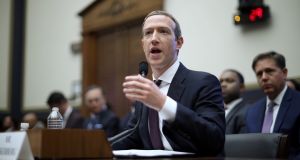 Facebook co-founder and CEO Mark Zuckerberg testifies before the House financial services committee in Washington, DC about Facebook’s proposed cryptocurrency libra, how his company will handle false and misleading information by political leaders during the 2020 campaign Photograph: Chip Somodevilla/Getty Images

Mark Zuckerberg, the Facebook chief executive, travelled to Washington to defend a cryptocurrency project that has become the latest target of lawmakers frustrated with the social media giant. He ended up answering a smorgasbord of questions on other issues Wednesday, as members of the House Financial Services Committee took him to task for everything from political advertising and disinformation campaigns to workforce diversity and child pornography.

“The impact of this will be a massive voter suppression effort. Your claim to promote freedom of speech does not ring true,” Ms Waters said.

The company now faces several investigations by regulators in a number of countries and by 47 state attorneys general, as well as increasing calls that it should be broken up into a number of smaller, less powerful companies.

Mr Zuckerberg acknowledged his company has a trust problem.

“I get that I’m not the ideal messenger for this right now,” he said.

He still brightened when the grab-bag discussion veered into the technical details of Libra. While presenting a rosy view of how the cryptocurrency would provide a safe way for billions of people around the world without bank accounts to exchange money affordably, he pledged Facebook would not offer libra anywhere in the world “unless all US regulators approve it”.

Representatives homed in on issues of national security and the ways that bad actors have used cryptocurrencies to pursue illicit activity. “You’re creating a whole new currency, which could be anonymous, that could create a whole new threat to Americans and national security, which is a huge concern,” said New York Democrat Carolyn Maloney.

Republican members of the committee were generally more supportive of Mr Zuckerberg. Patrick McHenry of North Carolina, the top-ranking Republican, said Democrats were going too far in trying to rein in new technology like libra. “American innovation is on trial today in this hearing,” Mr McHenry said.

Mr Zuckerberg spoke to that point, saying that if American regulators managed to stop libra, it would help countries like China develop their own cryptocurrency projects – efforts that could hurt the United States and the dominant role of the dollar.

Mr Zuckerberg vowed to try to address lawmakers’ concerns but also said he hoped to “address the risk of not innovating. I don’t know if libra is going to work, but I believe in trying new things”, he said, acknowledging that it has been “a challenging few years for Facebook.” – New York Times / Bloomberg