Review: Is the Hedkayse One worth the price tag? 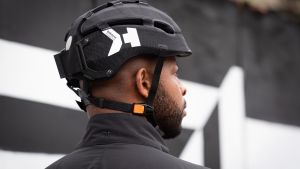 There are a couple of side buckles, a rear strap and a chin strap to adjust, so getting a comfortable fit is simple

If there is one topic that sparks a debate, it’s the usefulness of bike helmets. While there are efforts to make them compulsory for cyclists on the road, others see them as a panacea, safety theatre that distracts from the real safety issues.

I sit on the fence on this one. I wear a helmet not because I think it will give me some sort of magic protection if I’m knocked off my bike by a car, but because if I wobble off the bike for another reason, it might cushion my head from an impact with the kerb. Given the state of some of Dublin’s streets and cycle lanes, falling off is a real possibility. What everyone else does is entirely up to them, but I’ll keep wearing the helmet for regular commutes.

But they are bulky, and awkward to carry around. So when the Hedkayse One helmet landed on my desk, I was intrigued. The company claims it can withstand several knocks and collisions without having to be replaced, and it’s a one size fits most job thanks to the adjustable straps. Bonus: it can be folded down to a smaller size and put in your bag.

The idea of keeping a helmet that has been in a collision is alien to me. Every cycling helmet I have owned has been the hard shell type, backed with polystyrene. On the plus side, they seem sturdy and make you feel a bit safer; on the other, one fall and you have to replace it for safety reasons, because you never know what unseen damage has been done.

The Hedkayse helmet is different. It is lined with what the company is calling enkayse, a squishy material that effectively absorbs the impact and compresses rather than cracks. Then it reforms, as if the impact never happened. According to the company, it will still work effectively and pass European safety standards after a few knocks. That bodes well for the clumsy among us who may occasionally drop the helmet.

The helmet is comfortable, although it feels a little heavier than a regular one. It’s not far off the skateboarding helmet I have, so it’s not prohibitive.

The version I had for review is bright. Very bright. The entire helmet is covered in a fluorescent yellow material – it’s even called hi-vis yellow – that means you cannot be missed cycling on the streets. If even a mention of high-vis vests sparks rage, you might want to look at one of the other colours – grey, red, blue, black and premium leather finishes – which are more subtle. Basically, I stood out.

Fitting it was easy. There are a couple of side buckles, a rear strap and a chin strap to adjust, so getting a comfortable fit was simple enough. The helmet stayed in place and didn’t move, even with a bit of shaking around. It did get a bit warm, though, which may be an issue for some people.

The helmet comes with a strap that will help you squash the helmet to a smaller size and fit it in your bag. The WrapStrap, according to the company, helps you reduce the helmet’s size by about 50 per cent. I can’t say it’s exactly 50 per cent, but the Hedkayse One is the only helmet that fits in my bag rather than hanging off the outside when it’s not in use.

Because it was more compact, I was more likely to take it with me on days where I might use the bike but I wasn’t sure. So it encouraged me to cycle more.

What about collisions? Well, this is where we will have to trust the company on this one, as I don’t fancy deliberately pitching myself off a bike headfirst to test it. Hedkayse says its safety tests show the helmet passes the EN1078 safety tests after several impacts. Which is the same test the traditional bike helmet passes.

One size fits most, so there is no messing about with sizes. Conversely, that may put some people off. Also, being able to fold the helmet down is a welcome feature.

It’s a little heavier than my usual helmet, and some people may be a little more wary of moving away from traditional helmets.

The different finishes mean there is one that should suit everyone.

It won’t solve the debate of helmet versus safer cycling facilities, but it is a more convenient way to protect your head.