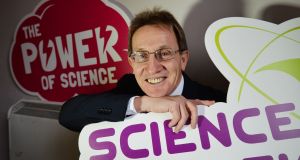 Prof Niall Moyna, from the Centre of Preventative Medicine in Dublin City University: ‘Within 15-20 years, you’ll be ingesting a pill that will measure all the internal physiological processes going on in your body and sent in real time to your phone.’ Photograph: Alan Betson

The increase of technology in healthcare will empower the world’s population to generate and process their own data, revolutionising how we view healthcare and moving towards a more preventative model, experts have claimed.

Professor Niall Moyna, from the Centre of Preventative Medicine in Dublin City University, said although technology was the root cause of many health problems – facilitating people to be less active – it could help deal with “appalling” levels of health literacy in Ireland.

“It’s empowering. Up until now there was what is called information asymmetry. Up until now the doctor had it all. The doctor had the monopoly on all the information,” he said. “Technology got us into this mess. It’s the digital age that has engineered activity out of our lives. The flip side is now we’re starting to use technology to enable us to take ownership of our own health.”

Prof Moyna compared it to the introduction of the printing press in 1440. “Within 100 years there were books and libraries all over the world,” he said. “Digital technology is going to have the same transformative effect 500 years later. It’s going to radically transform the world as we know it. Within 15-20 years, you’ll be ingesting a pill that will measure all the internal physiological processes going on in your body and sent in real time to your phone.”

A survey by Behaviours & Attitudes into the health of the Irish population found 13 per cent of adults take no exercise during the week, only just over a third take more than 3½ hours of exercise a week, and younger adults are the most unwell, with mental stress, depression and seasonal illness.

The research was released as Irish Life introduces a new health app aiming to encourage people to make small changes that improve their wellbeing. The My Life app rewards users for meeting goals and notching up achievements, such as meeting step counts, with points that can be swapped for rewards such as discounts on Fitbits. Users have an overall health score that can be improved by making small changes to diet, sleep and exercise, among other things.

“At Irish Life we are passionate about helping people build a better future,” said David Harney, chief executive of Irish Life. “My Life gives everyone, not only Irish Life customers, everything that they need to better understand their own personal health with a view to improving it.”