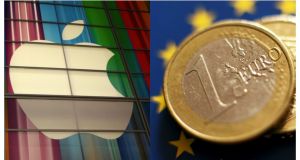 The findings follow more than three years of investigations by the European Commission into Ireland’s tax arrangements with Apple. 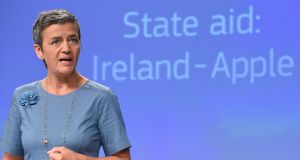 In a landmark ruling by the European Commission, Ireland has been ordered to recoup up to €13 billion from US tech company Apple in unpaid taxes.

The EU’s powerful competition arm said on Tuesday that Apple had been given selective treatment by Ireland through two tax rulings granted to the company in 1991 and 2007.

That treatment allowed Apple to avoid taxation on almost all profits generated by sales of its products in the EU single market, because Apple recorded the sales in Ireland rather than where products were sold, the commission said.

This was achieved by funnelling sales through a “so-called” head office in Ireland with “no employees, no premises and no real activities,” said commissioner Margrethe Vestager.

In a statement, the commission said the tax ruling “substantially and artificially” lowered the tax paid by Apple in Ireland since 1991, giving Apple a “significant advantage” over other businesses subject to the same national taxation rules.

“Member states cannot give tax benefits to selected companies – this is illegal under EU state aid rules,” said Ms Vestager. “The commission’s investigation concluded that Ireland granted illegal tax benefits to Apple, which enabled it to pay substantially less tax than other businesses over many years.

“In fact, this selective treatment allowed Apple to pay an effective corporate tax rate of 1 per cent on its European profits in 2003, down to 0.005 per cent in 2014.”

Apple said it would appeal and expressed confidence that the decision would be overturned.

While the precise figure will be worked out by the Revenue Commissioners, the commission estimates that the total money recovered will amount to about €13 billion – far in excess of what had been envisaged by Irish authorities.

Minister for Finance Michael Noonan is to seek Cabinet approval to appeal the decision to the European courts, a process that will likely take up to four years. In the interim, Apple will be obliged to pay the tax shortfall to the Irish exchequer. It is expected the money will be held in a frozen account.

Reacting to the announcement, Mr Noonan said the decision left him with “no choice” but to appeal the decision.

“This is necessary to defend the integrity of our tax system; to provide tax certainty to business; and to challenge the encroachment of EU state aid rules into the sovereign member state competence of taxation,” he said.

The US treasury said it declined to comment on specific cases, but expressed disappointment that the commission was “acting unilaterally and departing from the important progress the US, the EU, and the rest of the international community have made together to combat tax avoidance”.

“As we have said, we believe that retroactive tax assessments by the commission are unfair, contrary to well-established legal principles, and call into question the tax rules of individual member states,” the treasury said in a statement.

“The commission’s actions could threaten to undermine foreign investment, the business climate in Europe, and the important spirit of economic partnership between the US and the EU,” it said.

The Apple case follows similar cases against Fiat, Amazon and Starbucks, but the total tax liability is by far the largest judgment handed down by the EU’s competition division in relation to a member state’s tax arrangements.

In contrast to the multibillion-euro figure proposed, the commission ordered the Netherlands to recover €20 million-€30 million from Starbucks, and Luxembourg to recover the same amount from Fiat.

The EU’s powerful anti-trust arm, which typically rules on mergers and acquisitions, has increasingly turned its attention to corporate tax arrangements in recent years, focusing particularly on transfer pricing arrangements.

Tuesday’s findings follow more than three years of investigations by the European Commission into Ireland’s tax arrangements with Apple, since it first sought information from Dublin in June 2013.

The commission launched its investigation a year later, arguing that its preliminary assessment was that Ireland had illegally granted selective treatment to Apple in breach of EU state aid law.

Irish officials insisted on Tuesday that the full amount of tax due by Apple has been paid, arguing that, because most of Apple’s profits were not generated in Ireland, they could not be taxed in Ireland.

The kind of “stateless”, non-resident companies that were investigated by the commission have since been phased out by the Government, which means that the Apple judgment is unlikely to impact on Apple’s future tax arrangements in Ireland.

Much of the commission’s investigation focused on how Irish Revenue officials calculated “transfer pricing” arrangements for Apple in two separate tax rulings offered to the company.

Also known as “advance pricing arrangements”, transfer pricing governs how transactions between different entities of a corporation are priced, a process that can have implications for profit allocation and the company’s tax bill.

The commission says the Revenue Commissioners did not apply the proper “arm’s length principle” when calculating the transfer pricing arrangements for Apple. But officials briefed on the matter believe that because transfer pricing is notoriously difficult to price – the OECD outlines five different methodologies for calculating it – the commission’s case can be tested in court.

However, minutes from meetings between Apple and Irish Revenue in 1990 and 1991, supplied by Revenue to the commission as part of the investigation, show how a transfer pricing figure was negotiated between the two parties. The commission has argued that this arrangement was motivated by employment considerations.

According to Fine Gael MEP Brian Hayes, the credibility of the business environment in Ireland, along with its ability to attract foreign direct investment here, was on the line.

He said the taxation system should not be targeted for reasons of “anti-American bias”.

Mr Hayes accused the commission of overstepping its role and mandate, and said the ultimate decision in this case must be taken by the European Court of Justice.

“It’s in Ireland’s long-term interest that the Government appeals this,” he said. “The figure of €13 billion shows just how politically motivated this decision was. This was a clear statement that the commission wanted to hit US multinationals hard with this announcement.”

Liam Lynch, the president of Chartered Accountants Ireland, said the commission has learned nothing from the British Brexit vote.

“Because it is unable to challenge the tax system of a member state directly, the EU is attempting to use state aid rules to undermine the Irish tax system by the back door,” he said. “Such attacks on member state sovereignty were a key topic of this year’s Brexit debate, which ultimately resulted in the UK’s decision to leave the EU.”

However, others were backing the commission’s decision. The Anti-Austerity Alliance called on the Government to not appeal the EU’s ruling and instead use the €13 billion to tackle social crises such as the housing crisis.

Oxfam Ireland chief executive Jim Clarken called on the Government to shut down tax loopholes and reassure citizens that “sweetheart deals” with companies or individuals are a thing of the past.

“Ireland has benefited from multinational investment, but all companies should operate here under rules which are fair and which do not benefit some companies over others,” he said. “Deals that exempt companies from paying their legitimate share of tax mean the ordinary taxpayers have to foot the bill.”

Debt and Development Coalition Ireland (DDCI) called for a full Oireachtas debate before any decision was made to contest the ruling.

The announcement comes a week after a US treasury White Paper strongly criticised the commission’s recent investigations into the tax affairs of US multinationals. The issue has soured EU-US relations amid accusations from Washington that Brussels is unfairly targeting US companies, which the commission denies.

The findings mark the latest move by the European Commission to clamp down on corporate tax avoidance, a priority prompted by revelations such as the Luxembourg Leaks and Panama Papers scandals.

A revised proposal on a common consolidated corporate tax base, to which Ireland has traditionally opposed, is expected to be announced by the end of the year.