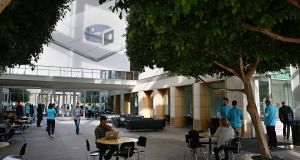 Apple’s new headquarters in Cupertino, California, where the new iPhone will be launched on Tuesday 12th of September. 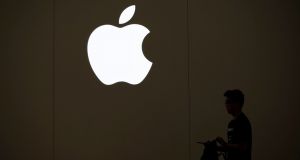 The 10th anniversary iPhone, offering significant upgrades in display, camera and overall design, will be launched at Apple’s new headquarters in Cupertino, California, on Tuesday.

Apple will test its customers’ loyalty, buying power and enthusiasm for innovation this week when it unveils the first iPhone to cost as much as $1,000 (€834).

The 10th anniversary iPhone, offering significant upgrades in display, camera and overall design, will be launched at Apple’s new headquarters in Cupertino, California, on Tuesday.

The high-end model is an addition to what is expected to be more incremental updates to the iPhone 7 and 7 Plus released last year.

Analysts believe the launch will help Apple overcome its growth problem of the past two years. In markets such as America and Europe, where smartphone ownership is close to saturation and many customers are holding on to handsets for longer, the best way to drive faster revenue growth is by charging more for each device, rather than rely on unit growth.

Apple is bringing in costly new components. These include an OLED display that enables the group to turn the front of the phone into one continuous screen, and depth-sensing cameras offering new “augmented reality” features that allow the device to be unlocked by face recognition, instead of a fingerprint.

At least one model from the next iPhone is expected to feature image-capture technology that can sense depth and track faces and expressions. A range of new emojis include monkeys and robots, whose animated expressions can mirror an iPhone user’s face as Apple battles for users’ attention with the likes of Facebook and Snapchat.

But more advanced components are in short supply, which could leave many customers waiting long after September to get hold of the new handset. That presents an opportunity for rivals such as Samsung with its Note 8 or Essential, the smartphone maker led by Android co-founder Andy Rubin, which is targeting premium customers with its slick $699 device.

Google is also said to be preparing an update of its Pixel smartphone, which has proved popular with early adopters.

With this competition at the high end of the market, Apple will be banking on customers’ loyalty to its interlinked family of products and service. But for the company to preserve its industry-leading profit margins, analysts say higher component costs point to the special-edition iPhone costing at least $1,000 – perhaps even more for models with higher storage capacity.

A survey by Creative Strategies and SurveyMonkey found 21 per cent of people planning to buy the new iPhone would do so whatever it costs, although 33 per cent of iPhone users said they would not upgrade if it was too pricey.

Segmenting the market in this fashion is common in mature markets ranging from televisions to cars, as well as Apple’s existing product line-up.

Apple’s desktop computers range from $500 for the Mac mini to $4,000 for a Mac Pro. The Apple Watch, when released, included a gold Edition model costing upwards of $10,000. “Apple have become the masters of segmenting a portfolio into very distinct price tiers,” says Geoff Blaber at CCS Insight.

“We tend to look at the headline [$1,000] number and think this is new territory for Apple but actually it has a far broader portfolio than many people realise,” adds the analyst.

Nonetheless, it could create a perception that Apple is fleecing its notoriously loyal and affluent customers. “There is going to be a lot of misunderstanding that this is Apple going out to extract as much as they can from their customers,” says Mr Blaber.

Citi Research analysts expect the “bill of materials” and assembly costs for the special-edition model to be $100 higher than for today’s iPhone 7, at an estimated $387. Half of that extra cost is due to the OLED display, which is available in more limited quantities from the supplier Samsung Electronics than the LCD screens in previous iPhones.

Wayne Lam, of the research group IHS, predicts Apple will be forced to price the device at around $1,000 to retain its gross margin of around 46 per cent. “It is no secret that Apple has the highest profit margins in history,” he says. “This year will test the price elasticity of regular consumers.”

Some customers are prepared to pay more for their smartphones because the device has become so central to their lives, analysts say. Other smartphone makers are taking advantage of that: Samsung’s Galaxy Note 8, released next week, costs $960. Monthly payments through mobile operator contracts, or bundled services such as music streaming can soften the blow.

Even a $1,000 phone costs less than many Starbucks’ customers annual outlay on lattes. Yet it is more than most people spend on PCs these days. “Given that phones don’t necessarily last more than two years, it’s a big investment,” Mr Lam says. “There is an economic reckoning that needs to be had with the ever-increasing costs of devices.”

1 Brexit: System agreed for Irish goods to skip checks on UK trade
2 Why are markets booming when a crash is on the way?
3 How much do Irish people earn? And what will Covid-19 do to our wages?
4 Drumcondra credit union collapses as merger plan fails
5 Could your old car be giving away all your secrets to its new owner?
Real news has value SUBSCRIBE