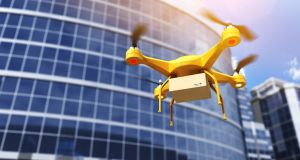 US businesses are deploying drones in unprecedented numbers, as uses for the unmanned aircraft move beyond photography into mapping, gathering data and even tracking criminal suspects.

With thousands of developers now building apps for drones on a common platform, the Federal Aviation Administration has admitted that it wildly underestimated the number of commercial drones in service. It now expects that there will be more than 450,000 of them in the sky this year, a total it originally predicted for 2022.

Meanwhile, analysts at Barclays estimate that the global commercial drone market will grow tenfold from $4 billion (€3.6 billion) last year to $40 billion in five years. They believe the use of drones will result in cost savings of some $100 billion.

The rise of the commercial drone industry comes as the consumer market begins to look saturated. Having first risen to prominence in the 1980s as a military technology, drones were miniaturised in the 2000s, resulting in a vibrant market for hobbyists and photography enthusiasts.

Now, thanks to software and vast improvements in cameras, sensors and processing technology, the FAA says that commercial drones appear to be “at an inflection point of demonstrating powerful stages of growth” that will “continue to accelerate over the next few years”.

In the telecoms industry, where workers climb up treacherous poles for inspections, drones are being deployed to assess them from the air instead. At oil and gas companies the aircraft are being used to conduct their monthly pipeline surveys instead of hiring $2,500-an-hour helicopter crews.

For Shenzhen-based DJI, the leading consumer drone manufacturer, with an estimated 70 per cent global market share, the commercial market has been in its sights since 2017. Primarily a maker of consumer drones, its technologies were unexpectedly picked up by American soldiers in the late 2000s, before being banned over cyber security concerns, forcing the company to refocus its strategy.

But the rapid growth of the market, and its multitudes of new applications, have taken even the market leader by surprise. Commercial purchases grew DJI’s enterprise business by 80 per cent in the past year, yet the company has not always had standards and frameworks in place designed to meet the sensitive purposes needed by government agencies – such as the department of the interior, which mans the biggest fleet in the US – that are using its products.

“We are running into a problem: the product wasn’t designed to meet their needs,” Mario Rebello, DJI’s regional manager for North America, said at DJI Airworks in September. “We’re being judged by decision makers, professionals, policymakers and others who want the product to be meeting their requirements. [But] we are a consumer company.”

Other companies, meanwhile, have stumbled upon the commercial market almost by accident, as they adapt to new business applications that manufacturers had neither considered or foreseen.

He says that when consumer drones first went mainstream around 2011, it was widely assumed that the likes of Amazon would be using drones to deliver products to people’s doorsteps by 2015. That potential was wildly overestimated – while other commercial applications appeared from nowhere.

For Adam Kaplan, the emergence of a market for public safety reshaped his entire business. In 2017 he had founded a gaming company called EdgyBees that used augmented reality so drone pilots could – in the real world – fly through a Star Wars-like universe seen through an iPad.

“Nobody thought that was a market – it was just that a bunch of police and fire departments went out to Best Buy and bought them,” Mr Kaplan said. “Counties like Los Angeles [realised] that instead of buying a $1 million helicopter they could buy a $1,000 drone or a $25,000 drone. So it’s really evolving.”

Likewise, the three South African founders of DroneDeploy say their business plans had to adapt to a changing market. In 2011 their goal was to use aerial photography to catch poachers in Kruger Park, a national landmark the size of Israel.

“What we realised is that it’s an incredibly difficult problem, for all sorts of reasons,” said chief executive Mike Winn. “Identifying there’s a person there doesn’t solve the problem – you still have to drive through the bushes first.”

Instead, they shifted focus to building software to create two and three-dimensional maps of simple terrain, construction sites, turbines and power lines.

Among their clients is the building group Brasfield & Gorrie, which has been using drones since 2015 in its construction surveying efforts.

“It’s a pretty labour-intensive process where surveyors literally go out every hundred feet to shoot a point with survey instrumentation,” said Hunter Cole, an engineer at Brasfield. “That process could take days or weeks . . . Now it’s 20 minutes of flying and a little bit of process time afterwards. It’s gone from days or weeks to hours.”

One catalyst for the market’s maturation is that more than 8,000 developers have converged upon a single open-source platform – akin to “Android for drones” – for writing software. When Auterion, a Swiss-American start-up, launched the platform two years ago it enabled the likes of Amazon, General Electric and the flying taxi start-up Lilium to rely on common standards. That cut costs across the board, accelerating development and making it easier for users to control multiple drones with one controller.

“We partnered with Auterion because they solve so many parts of our problem in software,” says Impossible Aerospace’s Mr Spencer. “They are the experts. There is no sense in us reinventing the wheel.”

Not everyone is pleased with the fast growth. PwC notes there are myriad concerns from the public including privacy, misuse, crime and accidents. Others think oversight can be too strict: when the FAA fined a photographer $10,000 for “reckless” flying in 2012, it set off a years-long legal battle.

Moreover, DJI has come under scrutiny in Washington for its alleged links to Beijing, prompting new US companies to try to fill the void. Among them is Skydio, a California-based drone maker focused on building autonomous surveillance aircraft.

Still, Romeo Durscher, director of public safety integration at DJI, sees plenty of potential for growth. He notes there are 40,000 police departments in the US alone – and only 500 of them have helicopters or fixed-wing aircraft. “The other 39,500 have nothing,” he says. “There’s a tremendous market out there.” – Copyright The Financial Times Limited 2019