LinkedIn Ireland pays out $1bn in dividends as revenues rise 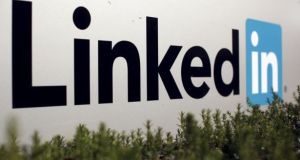 LinkedIn earlier this year announced plans to create 800 new jobs in Dublin in a move that will take headcount here to 2,000 by the middle of 2020

LinkedIn’s Irish subsidiary has declared a combined $1 billion (€908.5 million) in dividend payments to its immediate parent and ultimate owner Microsoft after a strong performance last year.

Newly filed accounts show LinkedIn Ireland Unlimited paid out $800 million to Microsoft in 2018. In addition, the subsidiary also declared and approved a $200 million divided payment to its immediate parent, LinkedIn.

The payout came pretax profits at the Irish unit fell to $84.8 million from $2.66 billion a year earlier. This follows a $2.6 billion exceptional gain in 2017 arising from a group restructuring that saw LinkedIn dispose of its intellectual property (IP) to Microsoft Ireland Research as part of the tech giant’s $26.2bn acquisition of the recruitment platform.

“Turnover is expected to continue to grow throughout 2019 and the company will continue to expand its operations in Ireland to support that growth,” directors said in a note included in the accounts.

LinkedIn earlier this year announced plans to create 800 new jobs in Dublin in a move that will take headcount here to 2,000 by the middle of 2020.

The company last year signed a lease for a new 13,935sq m (150,000sq ft) development at One Wilton Park in Dublin 2, which is due to open in late 2020. It is also set to retain its current offices at the same location.

LinkedIn Ireland’s revenue comes from a number of business lines, including talent and marketing solutions and premium subscriptions.

The latest accounts show it sold intellectual property (IP) to another group company for $55 million in 2018.

LinkedIn, which was acquired by Microsoft for $26.2 billion in cash in June 2015, has more than 660 million members globally, including two million in the Republic.

Founded in 2003, the professional networking platform opened its first Irish operation in 2010 with just three employees. It is now the company’s second largest office in the world after its global headquarters in Sunnyvale, California.

The Irish unit wrote-off $4.5 million in its investment in LinkedIn Australia last year and a further $15.7 million relating to impairment charges at a Brazilian-based subsidiary.

1 Guinness brings out a non-alcoholic version of the black stuff
2 Farm lobby seeks EU ban on vegan ‘burger’ and veggie ‘sausage’
3 How long can Government afford to keep State pension age at 66?
4 Don’t worry about the deficit – the lockdown risk is to jobs
5 Frank Fitzgibbon stepping down as Sunday Times editor
Real news has value SUBSCRIBE