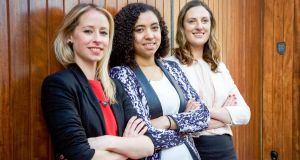 Among the other recipients were Harry McCann, the 18 year old founder of the Digital Youth Council, activist Paddy Smyth, and Enchant chief executive Joanne Larby.

JCI is an international network for young leaders and entrepreneurs, typically in their 20s and 30s.

The awards ceremony took place in the Mansion House, Dublin. The winners of the regional awards will compete for a chance to be named one of the country’s 10 outstanding young people at the National JCI Ireland awards in May, before going on to the international competition in November.

The idea for GirlCrew was born when Ms Carri used Tinder to find new female friends to socialise with. She then set up a Facebook group, GirlCrew Dublin, which has since grown to thousands of members.

1 Sacrificing pubs for schools: Ireland’s latest Covid trade-off
2 Elderly parents living in property you own will save you on capital gains tax
3 Owner of Dundrum Town Centre to sell prized assets
4 Hiring right people is key in Meath liqueur firm
5 How safe is it to go back to the office?
Real news has value SUBSCRIBE