London letter: Unless it can compromise with Apple, it may have to call in the lawyers 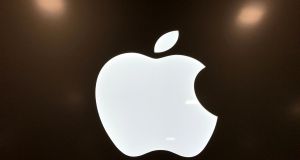 A battle with a company with pockets as deep as Apple’s is a daunting prospect. Phtograph: Lucy Nicholson/Reuters

A year ago, tech giant Apple was weighing up a takeover of Imagination Technologies, the Hertfordshire-based company behind the graphics in its iPhones, iPads, iPods, TVs and watches.

Talks were said to have reached an advanced stage but ultimately came to nothing after Apple decided against making a move. At the time, the cost of buying the British firm would have been about £500 million – small change to the biggest company in the world.

Now Apple has gone from would-be suitor to grim executioner, dealing what looks to be a death blow to the British firm, which relies on the US group for more than half its revenues.

Shares in Imagination crashed by more than 60 per cent on Monday as the company revealed that its largest customer will soon no longer require its services.

Instead, Apple plans to develop its own graphics chips and will be withdrawing its business from Imagination over the next couple of years.

The news shocked the market. One analyst, Neil Campling at Northern Trust, described it as a “black swan” moment for Imagination. “There is no way they could have seen that coming,” he said. But perhaps Imagination – and the market – should have seen it coming.

After the failed takeover talks last year, Apple started picking off key staff and is thought to have poached at least two dozen of Imagination’s senior executives and engineers, including its long-serving chief operating officer, John Metcalfe.

Imagination last year dismissed reports of a “brain-drain” from its business, saying it was simply part of the normal staff interchange between tech firms. But at the time it was already widely rumoured in the industry that Apple wanted to build its own in-house graphics team.

Now the rumour has become fact, the future looks bleak for Imagination. Once Apple ceases to use its intellectual property, the company will lose the right to royalty payments – more than half its annual revenue of about £120 million (€139 million).

It does not intend to go down without a fight, however, and unless the two companies can thrash out some sort of compromise, it looks as though the matter will end up in the hands of the lawyers. A battle with a company with pockets as deep as Apple’s is a daunting prospect indeed.

While Imagination was relatively restrained in its choice of words, the company made clear its doubts that Apple will be able to go ahead with its own operation without violating Imagination’s patents, intellectual property and confidential information.

It would, Imagination said, be “extremely challenging” to design new graphics from basics without doing so. It has requested evidence from Apple to prove otherwise, but that has not been forthcoming.

No doubt the lawyers will be repeating that request in the weeks ahead. In the meantime, the prospect of a costly legal battle with the most powerful tech company in the world simply adds to Imagination’s woes.

After their calamitous plunge on Monday, Imagination’s shares bounced back by more than 10 per cent on Tuesday on speculation that the business may now be broken up or attract the attentions of a bargain-hunting bidder, possibly from China.

There were even suggestions that Apple might be plotting to renew its own takeover ambitions at the new, knockdown price. After all, it is one of the British company’s largest shareholders, having built up a stake of more than 8 per cent some years ago.

Even in the ruthless world of big business, that seems an unlikely – and certainly unwise – scenario. Having caused the share price collapse in the first place, what Apple might save financially by such a move would be more than outweighed by a torrent of bad publicity on bully-boy tactics.

A big jump in the price of staple grocery products such as tea, butter and fish has persuaded more UK shoppers to switch to discount chains Aldi and Lidl in recent months.

The average household shopping bill increased by £21.31 in the first quarter of the year, according to data from Kantar Worldpanel, as prices rose by 2.3 per cent over the period.

The return to food-price inflation follows a lengthy period of deflation, fuelled by intense price-cutting and promotional activity by the supermarket chains. This has now tailed off significantly, data from another research firm, Nielsen, showed promotional activity down to its lowest level in more than a decade.

Kantar puts the combined market share of Aldi and Lidl at a record 11.7 per cent. As both companies continued their ambitious store-opening programmes, they brought in an extra 1.1 million shoppers over the three months.

1 Admission of mistake in Oxford vaccine dose raises doubts over reliability
2 Move to EU or face disruption, City of London is warned
3 Cliff Taylor: Deal or no deal we are now heading for a hard Brexit
4 Fiona Reddan: Who’s afraid of Revolut? Not AIB and BOI it seems
5 Central Bank rules out changes to mortgage rules during pandemic
Real news has value SUBSCRIBE