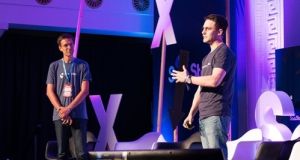 Speakers at the inaugural SaaStock conference in Dublin last year

SaaStock, a Dublin-hosted conference focused on software as a service (SaaS), which held its first event here last year, has raised an estimated £350,000 (€409,827) in a funding round led by some of Europe’s leading tech investors.

The conference, which is organised by London-based digital media and events firm SaaScribe, is aimed at early-stage to growth-stage business-to-business Saas founders and investors. It attracted more than 700 people to its inaugural event at the RDS last September, at which Stacey Bishop of Scale Venture, Des Traynor of Intercom and Siraj Khaliq of Atomico spoke.

Among the investors to back the conference were Christoph Janz and Pawel Chudzinski of Point Nine Capital, Conor Stanley of Tribal.vc, Erik Schut and Hans Janssen of Woodwing Ventures, Martin Henk co-founder of Pipedrive, and Tim O’Shea and Alexander Bruehl of The SaaS Garage.

No financial details of the new funding round were disclosed however,industry insiders estimated it to be worth about £350,000.

Organiser Alex Theuma, who is also the co-founder of SaaScribe, said the funding would be used to make the conference the biggest SaaS event in Europe.

He said the plan was to use the investment to double headcount in order to grow the event to 1,500 attendees this year.

“I knew we couldn’t continue to bootstrap beyond 2016 if we were to fulfil the vision for SaaStock. So soon after our first conference, we started speaking with potential investors, almost all of which attended our first event. I looked beyond the money, to those that shared the same passion for the SaaS community we had and could really add value. We’re delighted that we can count legends in the SaaS space such as Christoph Janz and Martin Henk as investors.” Mr Theuma said.

“SaaStock is firmly staying in Dublin because it is the right home for it,” he added.

The second SaaStock conference is due to take place over three days in September with over 100 speakers, including Ryan Smith, chief executive of Qualtrics and Rory O’Driscoll, general partner of Scale Venture Partners.

1 Corona beer firm reeling after 8% slide due to coronavirus
2 Why Irish banks are now looking beyond vulture funds on problem loans
3 Pharma giant AbbVie warned Government against ‘unfair’ €572m tax bill
4 ‘The only time apartments were viable was in . . . Ballsbridge, Killiney and Dalkey’
5 We have little chance of building enough homes to meet election promises
Real news has value SUBSCRIBE