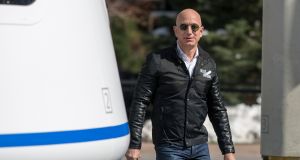 Standing against the backdrop of his New Shepard rocket booster and a full-scale mock capsule for carrying humans into space, Jeff Bezos revealed this week that he was selling about $1 billion (€0.9 billion) in Amazon stock a year to finance his Blue Origin rocket company.

Bezos, the billionaire founder of Amazon, showed off the reusable rocket booster and the mock-up of the capsule that will take people up for panoramic views back down at Earth, during a symposium in Colorado. Bezos, who hopes to build Blue Origin into a commercial and tourist venture, also disclosed that it would cost about $2.5 billion (€2.4b) to develop an even bigger rocket, New Glenn, capable of lifting satellites and, eventually, people into orbit.

Like his fellow technology titan Elon Musk of SpaceX and Tesla, Bezos has identified reusable rocket parts as a key to lowering the price of admission to the field, which he said this week would lead to a “golden age of space exploration”.

“If we can make access to space low-cost, then entrepreneurs will be unleashed,” he said.

Last month, Bezos announced the first paying customer, Eutelstat, a satellite company, for New Glenn, whose commercial flights would help offset costs. New Glenn is expected to fly by 2020, he said, but humans will not be passengers on the heavy-lift rocket until many years after that.

Bezos has repeatedly expressed caution about setting timetables for the start of Blue Origin’s commercial or passenger trips, and he did not diverge from that this week. He would not say when New Shepard would undergo its next round of test flights, or set a specific date as a goal, merely mentioning next year for possible tourist trips.

“It’s a mistake to race to a deadline when you’re talking about a flying vehicle, especially one that you’re going to put people on,” he said.

“I still think we can do commercial paying passengers in 2018.”

Asked how much passengers would pay, Bezos said he did not know yet, but he predicted ticket prices would decline as spaceflight became more common. (Hundreds of people have already put down deposits to reserve places on similar commercial trips on Virgin Galactic that could cost $250,000 (€235k) a ticket, although that company’s spaceplane has yet to take anyone up.)

New Shepard is a modest start for Bezos’s ambitions to tap into the nascent space tourism market. It is a single-stage booster with a capsule on top that is designed to carry six passengers at a time on trips of about 10 to 11 minutes. There will not be a Blue Origin crew on the spacecraft. Passengers wearing sleek jumpsuits will be able to peer out what the company says will be the largest windows in space, taking up about one-third of the surface area of the dome.

About 12 feet in diameter, the passenger capsule holds six black seats that resemble recliners, with panels offering details about altitude and other features of a trip. The engine that powers the booster produces up to about 110,000 pounds of thrust. On ascent, passengers will experience forces of about 3 Gs, about three times the normal force of gravity that humans experience on Earth. When the booster reaches a certain altitude, the capsule will detach and coast above the Karman line, which is 62 miles above sea level, officially entering into space.

There, the passengers will experience about four to five minutes of weightlessness. They can unbuckle their harnesses and do somersaults, if desired, in the padded-dome interior. On descent, they will encounter forces of 5 Gs. The capsule will parachute back to the plains of West Texas, slowing to a coasting speed of about 20 mph, while the booster drops and fires its engine to slow down and make a vertical landing. The capsule slows to 3 mph before touching down. Both pieces are reusable to make the trips more economical.

“Reusability is the key to getting millions of people living and working in space,” Bezos said.

While the concept is similar to the procedures SpaceX has used to recover the boosters for its Falcon 9 rockets, SpaceX’s endeavours have been far more challenging, because the boosters must accelerate to speeds of thousands of mph in order to put payloads on a trajectory to reach orbit. Just last week, SpaceX successfully launched a satellite into space with a reused booster, a first for commercial spaceflight.

New Shepard has a simpler flight path: just up and down, almost like a big roller coaster that slows to a stop at the top of its arc.

Both Bezos and Musk have much more ambitious goals beyond their current rockets. Musk wants to send settlers to Mars. Bezos has said his long-term vision involves having millions of people living and working in space.

1 How much state pension will I get next year?
2 Oxford Covid vaccine trials offer hope for elderly
3 Ulster Bank to introduce new card payment controls on app
4 Investors unnerved by Brexit, Covid-19 and US election jitters
5 How long can Government afford to keep State pension age at 66?
Real news has value SUBSCRIBE