National broadband plan to cover quarter of all Irish households 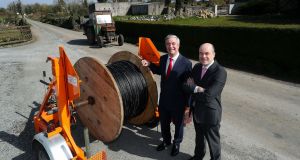 The Government’s broadband scheme will cover half a million homes, equivalent to a quarter of all Irish households, making it one of the largest state interventions in a telecoms market anywhere in the world.

He said an additional 300,000 homes originally earmarked for the State’s National Broadband Plan (NBP) would now receive fibre broadband within two years as part of Eir’s commercial rollout. This follows an agreement between the department and the former State monopoly.

“The agreement that I have signed with Eir means one house every minute of every working day will get fibre-to-the-door high-speed broadband over the next 90 weeks,” Mr Naughten said.

However, Sinn Féin TD for Laois Brian Stanley said Eir had “cherrypicked and donutted large parts of the countryside” with its new fibre product, effectively ringfencing the more commercial homes while leaving the harder-to-reach ones for the State scheme.

However, Mr Naughten said there was a legal obligation on Eir to make its infrastructure in these areas available to the successful NBP bidder.

He also said the department’s commitment contract with Eir contained stringent financial penalties if the company reneged on its pledge.

Controversy surrounding Eir’s decision to cover 300,000 homes previously included in the Government’s plan has dogged the process from the start.

Rivals accuse the company, which previously deemed the homes uneconomic without a State subsidy, of trying to game the process by removing the quasi-commercial end of the contract.

The stakes are high for the State’s largest telco as losing a big contract in its own backyard could endanger a possible flotation next year.

The department’s deal with Eir radically alters the scope of the Government’s intervention, opening up the possibility of a legal challenge from one of the other bidders. The department acknowledged the legal risk in a memo brought to Cabinet on Tuesday.

In response to the Minister’s announcement, Siro said it would review “whether this changed scope impacts the viability” of the company’s participation in the process.

The so-called “digital apartheid” between urban and rural areas repeatedly came up as a major concern on the doorsteps during the last general election.

The Government’s scheme, first announced by the then communications minister Pat Rabbitte back in 2012, has been slow to get off the ground, however.

The first homes are not expected to be connected until the middle of 2018, but the department hopes 95 per cent of the homes will be connected by 2020.

The Government is expected to stump up half the cost of the scheme, which could run to between €1 billion and €1.5 billion. However, it is difficult to estimate the final cost because of the State’s legacy of one-off housing.

Eir welcomed the Minister’s announcement, which it said recognised the company’s role in delivering high-speed broadband to the majority of homes and businesses in Ireland.