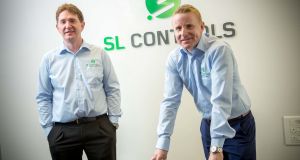 Keith Moran is loath to give away the names of some of the companies with whom he works. Many of them are big-pharma, medical-device and food-and-beverage companies with highly confidential systems in place. It’s par for the course for SL Controls, a leading equipment systems support firm which last year had sales of €4.2 million.

The company has taken on 10 people since the start of the year and has plans to create another 30 full-time jobs in Ireland over the next 12 to 18 months.

SL Controls was founded in Sligo in 2002 by Keith Moran and his business partner, chief technology officer Shane Loughlin. They started out with a €40,000 loan from Loughlin’s father, operating from the kitchen of his home. Today the company employs more than 70 people across five offices – four in Ireland and one in Birmingham.

“Shane had been in industry a long time and had a very good reputation. I had a fair bit of business acumen and had a natural flair for it,” says Moran. “We felt there was a gap in the market for systems integration at the level of technology at which Shane was capable of working, so we decided to break out on our own.

“We had no debts at the time, so we didn’t have much to lose but our reputations.”

SL Controls specialises in producing software that can be integrated with manufacturing lines to track products the whole way through production and on to the end client. An increased focus on counterfeit drugs and on traceability in the food sector is driving the success of the business, which last year launched a suite of software products, Totalline, which had been several years in development.

Internal quality systems are paramount to SL Controls’ business: “If you do not have the correct quality-management system in place to ensure the right checks and balances are in place, the same time, every time, it could impact a batch which would have a detrimental effect on our customers’ reputation and on our reputation. That’s why we have a huge focus on our own internal quality,” says Moran.

Getting engineering graduates who are trained to the standard required by the company has been a challenge over the years and the founders, who are advocates of a scholarship/working-on-the-job model, are working with different institutions including Institute of Technology Sligo to develop a scholarship in equipment systems engineering.

“That’s how we see ourselves growing the type of engineers we need holistically,” says Moran. “So if the title of this article is ‘Future Proof’ that is what we are working towards in order to get the number and level of engineers we need. We have invested heavily in training through our equipment systems engineering academy within the business – a central location where knowledge can be shared among the group.”

The company has also swooped on departing staff at HP’s Leixlip print facility, which announced in February that it was closing. To date, the firm has hired seven people from the plant and it anticipates going back for more as they become available.

Moran says SL Controls is keen to see more women enter the engineering business too, and while many women are employed by the company across areas such as payroll and human resources, their engineering staff are predominantly male.

“Engineering is heavily weighted towards the male,” says Moran. “We have just one one engineering intern who is female, so we are focusing on schools to highlight engineering to young women. We find often through our ECubers initiative that females are a lot more analytical and they have a huge part to play if we could get more of them into the industry.”

While SL Controls has a serviced office in Birmingham, the impending Brexit situation has meant the focus of the company’s overseas expansion is on mainland Europe and the United States.

“We are currently doing serialisation instals in Germany, the Netherlands, Belgium, France. Standards and guidelines are the same across the board and the language barrier hasn’t been an issue for us, as everyone we are dealing with speaks English. The only thing is to make sure that our employees are catered for properly financially when travelling in the various countries,” says Moran.

As the company has grown, Moran says it has been important for it to develop the correct benchmarking in terms of employee pay and benefits in order to compete with the large multinationals in attracting staff. The company employs staff from Ireland but also from Croatia, France, India and Germany, among others; and, as its reputation has grown, it has had more success in attracting and maintaining staff at the company, Moran says.

Creating an environment in which employees want to work has been important too and is what prompted the company to open offices in Galway, Limerick and Dublin as well as its 560sq m (6,000sq ft) headquarters in Sligo.

“I felt that the investment in the various regions was prudent in order to attract and retain staff but also to have our services in the areas where our customers are,” says Moran.

3 Dublin drops out of top 10 ‘most liveable’ cities