Inside Track: Brendan Woods, founder and chief executive of OCREX

‘In the technology space, it’s hard to avoid noticing things that the likes of Elon Musk are doing’ 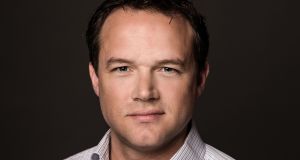 Brendan Woods: I think banks are a lot more open for business

Brendan Woods’ eureka moment occurred over coffee with a colleague who was explaining to why he’d left an accountancy firm.

“I thought it was hilarious that someone with seven years in college would spend so long typing up stuff and I thought it could be automated so I had a go.”

The software developer has since created AutoEntry and AutoRec by OCREX, scanning technology for bills, statements and expenses. At present, they employ 10 staff in Ireland and five in Britain.

We charge our clients based on how much they use it, therefore only for what they use and people really appreciate that.

What’s been your biggest challenge in business?

Cash flow is always a challenge early on and also hiring highly skilled developers. Dublin is a hub now for tech start-ups as well as non-tech companies so there’s a lot of competition for really good engineers. You just try and create a culture that they are happy to stay in and that they don’t jump.

What is your major success to date?

At times we do reminisce – we say, do you remember the time that we stayed in that hovel and there was a cat flap in the bedroom door on to a roof? Things like when you’d go to a conference with a laptop and a little projector versus actually having a proper stand and looking professional. The big success is that transition and being able to look back and see that.

What could the Government do to help SMEs?

We’ve benefited a lot. I think, in the early days, some start-ups don’t necessarily realise how much is available to them. You do have to look for it. They are not going to necessarily know or chase you down. If you don’t bother to look, you won’t find.

Do you think that the banks are open for business?

I think they’re a lot more open for business and I want to caveat that a little bit because I think in the past they were criticised heavily for not being open. There were two sides to that story. One is, yes, they were probably more reluctant in what they were approving for loans and so on but don’t forget [that] three years ago I’m sure the risk profile of the prospects applying for loans were at a higher risk place in their business. We were in the depth of an enormous recession, businesses needing loans might not have had the most rosy of prospects ahead of them.

We could’ve probably grown faster, been more aggressive in our growth strategy and implementation. We never wanted to be reaching so far ahead that we couldn’t pull back. In terms of a lot of tech companies in particular, it’s very costly to build software so you’ve these costs up front before you bring in revenue.

Had we gotten it to market sooner by funding ourselves more and spending money on building things quicker at a higher risk, per se, we’d have got out quicker and become a big company quicker. But, as a first-time entrepreneur, you don’t want to be falling flat on you face either.

Whom do you admire most in business and why?

In the technology space, it’s hard to avoid noticing things that the likes of Elon Musk are doing. He just repeatedly seems to surprise me with how outside the box his thinking is in terms of how he can disrupt really big industries which would be generally very protected.

Fortunately my parents were self-employed so I’d say I’ve received a lot over the years. One that always stands out is that when you really mess up with a customer, how you deal with that situation can actually create more loyalty than you ever had in the first place. You are going to mess up, everybody messes up, its how you deal with it.

We’re going to keep doing what we’re doing, we are thankfully doing very well and to correct what I said earlier, which is to grow faster. We need to go out now and say we actually want to raise proper funding and become a real global player in what we do.

There is always going to be a price where it’d be hard to resist. I’m not in a rush to sell it, not because I’m so invested in it personally, but because I think with what we’re going to do in the next year to two years, it might be premature to look at being acquired at this stage or being sold.