Chinese company poised to battle the likes of Lenovo, HP and Dell as sales dwindle 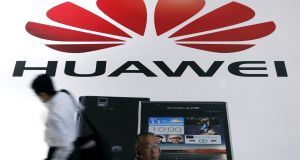 At a news conference in Berlin, Huawei introduced its first line-up of three personal computer models for consumers including a 15.6-inch screen notebook, a 2-in-1 tablet and notebook hybrid and an ultra slim, metallic 13-inch notebook. (Photograph: Kiyoshi Ota/Bloomberg via Getty Images)

Chinese network and smartphone giant Huawei said on Tuesday it plans a global expansion into computers, posing a fresh challenge to established PC players in a market that has suffered from two years of steady sales volume declines.

At a news conference in Berlin, Huawei introduced its first line-up of three personal computer models for consumers including a 15.6-inch screen notebook, a 2-in-1 tablet and notebook hybrid and an ultra-slim, metallic 13-inch notebook.

Initially, the new entrant is targeting the premium-priced consumer computer segment, pitting it against dominant PC players Lenovo, HP and Dell, which collectively hold more than 50 per cent of the market and possibly even Apple’s Mac computer business.

Huawei’s Matebook X is a fanless notebook with splash-proof screen and combined fingerprint sign-on and power button, priced between €1,399 and €1,699.

1 How safe is it to go back to the office?
2 Elderly parents living in property you own will save you on capital gains tax
3 Construction workers among first PTSB borrowers off payment breaks
4 Owner of Dundrum Town Centre to sell prized assets
5 More than 40% of help-to-buy recipients already had deposit
Real news has value SUBSCRIBE