Cantillon: we can expect bouts of nerves in Europe as Draghi faces delicate balancing act 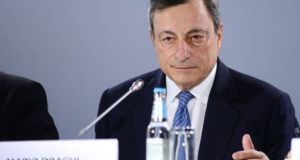 Mario Draghi: he wants to keep his options open as to how fast “tapering” will take place

Central banks pumped vast sums of cash into the major economies in the wake of the great economic crash. But reversing these extraordinary policies is far from easy, as the US Fed discovered in 2013 and the European Central Bank is now finding out.

The European economy is – finally – showing signs of recovery, and the ECB is now considering when to accelerate the withdrawal of its massive programme of monetary support and how quickly to do so. President Mario Draghi sent speculation soaring that the ECB might move quickly enough when he appeared to take an upbeat tone in a speech on Tuesday, saying that “deflationary forces have been replaced by reflationary ones”.

The markets took this as a sign that the ECB is getting ready to act, and the euro rose quickly. Then on Wednesday the ECB stepped in, with senior officials briefing the media that the speech had been over-interpreted and some of the nuances lost.The euro rally ran out of steam and analysts expressed some puzzlement.

At issue is mainly the €60 billion in bonds – mainly issued by governments – which the ECB buys each month. Analysts expect that the ECB might signal towards the end of this year that the monthly purchases will be cut through next year and eventually phased out.This would then pave the way for a later move to push up interest rates.

Draghi clearly wants to keep his options open as to how fast this so-called “tapering” will happen. He needs to navigate the tricky political waters within the ECB,where a German-led wing is pushing for extraordinary measures to be phased out quickly. He also faces economic uncertainty. Growth appears to be picking up, but inflation remains stubbornly low and is still way below the ECB’s 2 per cent target.

And the more the euro rises, the more it will hold down inflation by depressing import prices into Europe.

As the Fed started to withdraw its monetary stimulus in 2013 it set off a few “taper tantrums” in the markets, notably sending long-term bond interest rates sharply higher for a period.

With Draghi facing such a delicate balancing act, we can expect similar bouts of nerves in Europe in the months ahead.