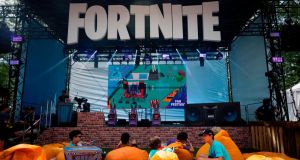 The maker of the popular video game Fortnite has launched a legal challenge to Apple and its practice of taking a 30 per cent cut of app revenues, after the game was thrown out of the App Store for trying to get around the policy.

In a lawsuit launched within minutes of Apple’s retaliation, Epic alleged the company “imposes unreasonable restraints and unlawfully maintains a total monopoly” over the distribution of apps used on Apple devices.

Fortnite is among the top-grossing apps of all time, free to download but earning revenues estimated at $34 million a month from in-app purchases of items such as tools and outfits. Apple takes a 30 per cent cut. The game is extremely popular among Irish gamers.

Developers have railed against what they call the “Apple tax” since it was introduced in 2011, and it has more recently attracted the attention of US Congress, which is investigating allegations of anti-competitive behaviour by big technology companies.

In a statement, Apple said Epic Games “took the unfortunate step of violating the App Store guidelines that are applied equally to every developer and designed to keep the store safe for our users”, resulting in its removal.

Epic introduced a direct payment option that bypassed the tech group and incentivised gamers to use it by offering a 20 per cent discount on the Apple price for in-app purchases. It introduced the option without having Apple review it first. Each practice violates Apple’s rules.

“With Apple’s unlawful conditions and policies, Apple ensures that the App Store is the only distribution channel for developers to reach iOS app users, giving Apple overwhelming monopoly power in the iOS app distribution market,” it said.

“Apple’s power is further evidenced by its ability to extract supra-competitive taxes on the sale of apps through the App Store.”

Epic held little back in its legal papers, portraying Apple as the kind of monopolistic power that the Steve Jobs-founded company once fought against.

It reminded Apple that Jobs once introduced the Macintosh computer as “a beneficial, revolutionary force breaking IBM’s monopoly over the computing technology market”.

Today, the lawsuit went on, “Apple has become what it once railed against: the behemoth seeking to control markets, block competition and stifle innovation”.

It added: “Epic is not seeking monetary compensation from this court for the injuries it has suffered. Nor is Epic seeking favourable treatment for itself, a single company. Instead, Epic is seeking injunctive relief to allow fair competition.”

Google also ejected Fortnite from its Play store on Thursday over the same payment violation. Unlike owners of Apple devices, Android users can still download the game directly from the web, bypassing the Play store, or through alternative Android app stores. However, Play has a dominant position on Android handsets and is the way most users find and download new apps, leading Epic to bow to Google’s payment terms and join the store earlier this year.

Defending its action, Google said it had “consistent policies that are fair to developers and keep the store safe for users”, and that it hoped to “continue discussions” with Epic to bring the game back to it store.

Apple, which is on the verge of becoming the first $2 trillion tech company, has previously defended its payment practices by pointing out that the vast majority of apps are free and do not incur fees. It also says the App Store facilitated more than half a trillion dollars of commerce last year and suggested that companies complaining while earning money “simply want a free ride”.

On Thursday Apple added that Epic was an example of a company that had built a successful business on the App Store and was now seeking a “special arrangement”, whereas Apple’s guidelines “create a level playing field for all developers”.

According to SensorTower, an app analytics group, in July alone Fortnite had two million downloads and earned $34 million in revenue. That placed it within the top five iPad apps and top 10 iPhone apps, by gross revenue.

When chief executive Tim Cook was asked about Apple’s fees by Congress last month, he called the App Store “an economic miracle” that was probably “the highest job creator in the last decade”.

David Cicilline, chairman of the US House of Representatives antitrust committee, called the 30 per cent fee “exorbitant” and compared it to “highway robbery”. – The Financial Times Limited

1 Will your boss let you work long-term from home – or from abroad?
2 McGuinness faces Brexit and Covid grilling at parliamentary hearing
3 Will tracker mortgage be at risk if Ulster Bank closes?
4 Whistleblower warned EY of Wirecard fraud four years before collapse
5 Ryanair signals possible closure of Cork and Shannon airport bases
Real news has value SUBSCRIBE