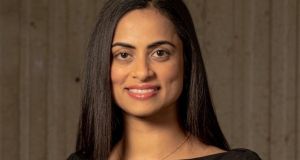 Dhivya Suryadevara was a key player in the cost-cutting moves in 2019 that closed three plants and axed 11,000 jobs.

General Motors (GM) is being unexpectedly deprived of a rising star and one of the US car industry’s few senior female executives after its chief financial officer announced she was stepping down after two years to take a job at financial technology company Stripe.

Ms Suryadevara’s departure leaves GM without a talented executive who oversaw its finances during last year’s strike and a pandemic-induced factory shutdown earlier this year. At 41, she was one of the youngest leaders on chief executive officer Mary Barra’s team.

The high-level departure from the blue-chip automaker for a nine-year-old tech company comes as Detroit faces an uncertain outlook amid falling demand and the ascendancy of electric-vehicle leader Tesla, whose valuation dwarfs GM’s roughly $41.5 billion (€35.2 billion)market capitalisation.

“I am grateful for the opportunities I have been given at General Motors,” Ms Suryadevara said in a statement. “While I look forward to a new opportunity that will allow me to apply my skills in a new sector, I have great confidence in General Motors’ trajectory and future.”

In April, Stripe raised $600 million from investors including Andreessen Horowitz, General Catalyst and Sequoia Capital. The round gave Stripe a valuation of $36 billion, making it one of the most valuable startups in the US and a hair’s breadth from GM’s, according to CB Insights.

The company has been in growth mode during the global pandemic and expanded to five new European markets in May. That fast growth and its high valuation has made it a top candidate to go public. Hiring a prominent finance chief is often a step companies take as they advance in preparations for an initial public offering (IPO) and need to make a strong case to potential investors, but the company denied it’s going public.

“We have no plans to IPO,” said a Stripe spokesperson via email.

Adam Jonas, an analyst at Morgan Stanley, said the shakeup in GM’s senior ranks is a blow to the company and indicates the struggle automakers have cultivating and retaining executive talent. “Suryadevara was highly regarded by investors and, in our opinion, is a material talent loss to General Motors at a sensitive time in the company’s history,” he wrote in a note to investors. Mr Jonas called a brain drain of capable leaders the “biggest challenge facing Detroit”.

Who is the replacement?

GM named John Stapleton, its north American finance chief, acting chief financial officer while it conducts a search for an internal or external candidate to take on the job in a permanent capacity.

Mr Stapleton is a GM veteran who has been responsible for the automaker’s most important business unit, said Credit Suisse analyst Dan Levy.

Ms Suryadevara ran GM’s finances through a successful and also tumultuous period capping her 16 years at the company, starting as an analyst in its treasurer’s office. She leaves at the end of the month, said a company spokesman.

She was a key player in the cost-cutting moves in 2019 that closed three plants and axed 11,000 jobs in order to save $4.5 billion. The savings kept profits aloft even as auto sales stagnated.

Her tenure also included a 40-day labour strike that cost the company $2 billion and, more recently, almost two months of plant shutdowns due to the Covid-19 pandemic.

Ms Suryadevara initiated cash-saving moves during that time, which resulted in smaller-than-expected losses in the second quarter. GM has told investors it will likely return to profit in the second half of this year. – Bloomberg