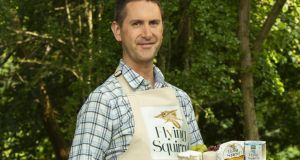 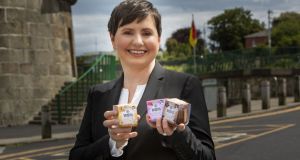 Andrea McNamara, founder of Mudita, with some of the company’s range of vegan dessert products. 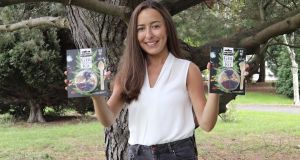 Laura McCarthy: stirring up the spirits market with a range of garnishes for gins and tonic via her company Drink Botanicals.

Garnishes for gins and tonic (G&T), vegan cheese, and cashew nut-based desserts are just three of the products launched by some of Ireland’s latest crop of food and drink entrepreneurs.

Laura McCarthy developed a taste for commerce at the tender age of eight when she ran yard sales outside her parents’ home. By 12, she was selling on Ebay and eight years later she founded Drink Botanicals, which produces infusion kits for budding mixologists.

McCarthy got the idea for her business when she found herself paying a premium for fancy gin and tonics with “garnishes” such as rose petals and juniper berries. She started researching how to make them at home and towards the end of 2017 approached the owner of her local off-licence with her kit idea.

“He was really positive and told me that customers were already asking for garnishes to make luxury G&Ts at home,” she says. The off-licence subsequently placed an order for a dozen kits and they sold out in a week. This was all the encouragement McCarthy needed and Drink Botanicals is now stocked in more than 250 outlets and the company employs three part-time staff.

“I always wanted to start my own company,” says McCarthy who spent a big chunk of last year juggling her business and an internship at KPMG while taking a year out from her marketing degree at TU Dublin. “I could see how fast the gin trend was growing and based on being charged €12 for a G&T with a garnish, I spotted a gap in the market.”

There are currently four kits with gin and cocktail themes respectively and a vodka kit is on the way. The kits are available online, in off-licences and in SuperValu stores around the country. McCarthy is gearing up for a listing on Amazon UK and plans to move into Europe through a distributor.

Start-up costs were about €35,000 and this was largely self-financed with support from the Dublin City Local Enterprise Office. The business is generating cash and McCarthy is happy to grow it organically for now. Most of the marketing is done through social media. “I have already changed the flavours to keep customers interested and the possibilities are endless,” she says. “For example, chilli is not a taste you’d associate with drinks but it gives them a nice kick and a lovely colour.”

Three years ago, a serious healthscare prompted Andrea McNamara to go vegan and cut out all gluten and refined sugars, too. For someone with a sweet tooth whose business was making macarons for weddings and corporate events this was a dramatic change but McNamara felt it had to be done to help her recovery. Having made it through chemotherapy on smoothies and energy balls, she went looking for a dessert treat that fitted her new dietary requirements and was hugely disappointed to find nothing suitable. Recognising that there had to be other people in the same boat as her, McNamara decided to draw on her culinary expertise to create vegan desserts and the idea for Mudita chilled mousses was born.

Mudita – which means rejoicing in other people’s good fortune in Sanskrit – was established in May 2019 and the company began trading last October. There are currently three cashew nut-based mousses (raspberry, mango and chocolate) in the range with three more on the way.

“Cashew nuts are great for giving a neutral, creamy backdrop and allowing the other ingredients, such as the fruit purees, to shine,” McNamara says. “I also include a superfood in each one so there is a hint of turmeric in the mango pot while the organic raw cacao in the chocolate pot is a superfood in itself. My aim is to provide desserts that are flavoursome but based on healthy, natural ingredients so the mousses are free from gluten, soya, preservatives and refined sugar. All of the packaging is recyclable and the desserts are presented in glass jars that I hope people will reuse.”

McNamara invested about €20,000 to get her business off the ground and it was just beginning to gain momentum when the Covid-19 lockdown stymied the in-store tastings that were crucial to introducing consumers to the products. With restrictions now easing, McNamara will be adding more outlets but for now store tastings are off the agenda.

“A lot of the current food innovation is coming in plant-based categories which are meeting the growing consumer interest in vegan and vegetarian products,” says food industry veteran James Burke who has spent the past 15 years advising businesses on new product development. “For some producers, the innovation actually involves going back in time and draws on traditional methods and craft skills.”

An example of someone reverting to these traditional methods is Colm Farrell founder of Flying Squirrel vegan cheeses. Farrell became vegan in 2014 and one of the things he missed was cheese, so four years ago he started studying cheese-making with a view to producing a vegan alternative from plant-based milks. He became hooked on the craft and learned about culturing, fermentation, coagulation and ageing before applying the techniques to nut milks to produce a Camembert-style cheese with a creamy texture made from cashew and macadamia nuts and a soft cheese made from almonds that can be eaten on crackers, in a sandwich or on toast.

Farrell gave his company its unusual name to get over the somewhat puritanical undertones that often go with veganism. “I saw a documentary about flying squirrels and loved them and when it came to naming the company I wanted something that was fun rather than too serious,” he says.

Like many small food entrepreneurs, Farrell has a “day” job to keep body and soul together while building his business. He works as a legal executive for 3½ days a week and combines this with a seven-day week as a cheesemaker. He is currently making and distributing everything himself but intends to establish his own production unit and to take on staff and a distributor in due course. Investment in the business so far has been about €30,000 which has largely been self-funded, with some help from Dún Laoghaire-Rathdown Local Enterprise Office.

“There are currently no other similar products in supermarkets that give the consumer a genuine artisan alternative to dairy,” Farrell says. “I would classify the products that are available as commodities that are made by mixing starches and oils. They are not handcrafted using traditional techniques. People have accepted Flying Squirrel’s products very well and they are selling out every week.”