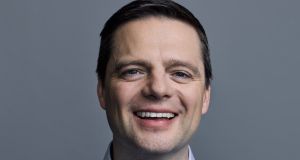 Workhuman co-founder and chief executive Eric Mosley: “A social recognition platform such as Workhuman helps lead to a focused, energised employee base who are going to work more productively.” 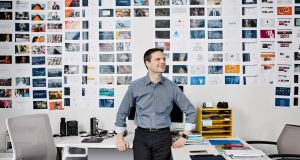 Eric Mosley says Workhuman was the first to reinvent the concept of recognition in the workplace as a social activity.

It might have taken a move to the US for Eric Mosley to turn Workhuman into a global success but it will be Europe that provides the next wave of growth, according to the Dubliner.

Mosley relocated to Massachusetts along with his young family in 2005 to help scale the business beyond its home market. Companies in Europe have belatedly realised the importance of employee recognition as a tool to improving the bottom line, he says.

“If you go back five or six years, Europe was very much behind the US in this but we established a team of data scientists who were able to dig deep and demonstrate return on investment for businesses. The European market needed to see the science to believe it was credible,” Mosley explains.

Workhuman last week became only the second Irish company after Intercom to officially confirm it has reached unicorn status, a title given to privately held tech companies worth $1 billion or more. The move came after London-based alternative asset manager Intermediate Capital Group (ICG) came on board as a strategic investor by acquiring a 10 per cent stake for $120 million from existing shareholders.

It may not be a household name, but Workhuman has quietly prospered into a large international company, with revenues of $700 million last year. With more than five million employees using its platform across 160 countries, it operates employee reward and incentive schemes on behalf of some of the world’s biggest companies, including Cisco, GE, LinkedIn, Procter & Gamble, Symantec and KPMG.

“If you are running a small company you can take all your staff to the pub on a Thursday night for team building but when you are leading a business with say 100,000 employees spread out at over 100 locations, you have to do more to ensure cohesion and morale,” Mosley says.

“A social recognition platform such as Workhuman helps lead to a focused, energised employee base who are going to work more productively. In addition to rewarding a wide range of employees it also provides other insights on areas such as diversity and inclusion that goes even further to making people feel recognised and rewarded.”

The company was founded in Dublin in 1999 as GloboGifts. Mosley, who set up the company with Eddie Reynolds, originally envisaged it as an “Interflora for gift certificates” with the idea that individuals might buy certs as gifts for family and friends. However, it wasn’t long before they realised there were much bigger opportunities available.

“What happened was that rather than consumers we were winning corporate customers who instead of ordering just one gift certificate from us were ordering them by the 1,000 to reward employees. At the same time, there was this whole new world of social media flourishing and we realised that bringing the two together could have a major impact,” Mosley says.

The entrepreneur (49), who has held on to his accent despite the years away, rebranded the company as Globoforce and achieved a fair degree of success locally before a change in legislation made it less of an incentive taxwise for employers to reward staff. This ended up being a blessing rather than a curse for the company.

“We were spending way too much time chasing business that was tax-incentivised that largely disappeared and so we had to focus instead on the long-term vision of the company, which as I saw it meant moving to the US. I’d been going over for a few weeks at a time but it was only when I relocated that I realised the importance of being on the ground in terms of absorbing fully how the culture works.

“It was a pivotal moment for the company because the market there was much more evolved, although even in the US the employee recognition programmes were old-fashioned and hierarchical.”

The businessman says Workhuman was the first to reinvent the concept of recognition in the workplace as a social activity.

“In the past, it was something driven by managers who designated who their top 10 performers were and rewarded the same people again and again. We worked to turn that upside down by telling companies they needed a bigger winners’ circle. Basically, you want 90 per cent of employees to feel appreciated rather than just one or two so we encouraged more awards to be given to more people and for it to be something that is designated as a function to employees themselves,” Mosley says.

“The result is that everyone feels they are a part of a team. The relationships between people get deeper and retention goes up because staff don’t want to leave a place where they are fulfilled and where the work they do is recognised and rewarded.”

Workhuman, which rebranded from Globoforce in 2019, has grown every year over the past 20 years and is on course to reach revenues of $1 billion by the end of 2021. In the early days, Mosley didn’t just get out and sell the concept but also did much of the coding of the company’s platform. Even though he is keen to return to Dublin at some point and says an initial public offering (IPO) is on the cards, he’s in no rush to relinquish control of Workhuman.

“[Until recently] we hadn’t raised money since 2004 and over the lifetime of the company we’d only raised $14 million because I’ve always believed that raising huge investment can be detrimental to development as you have to generate returns to suit investors’ timescales. That corrupts the natural evolution of the business. But that said I’m in favour of an IPO at some point because it means even greater rigour and governance,” he says. “Even if there is one and that is something I think will happen, I’ll be thinking of staying on for a while afterwards. I’m in it for the long haul.”