Uber agrees to acquire US food delivery group in in $2.65bn deal 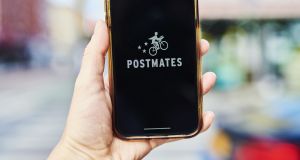 Founded in 2011, Postmates was one of the first to let customers in the US order meal delivery using a mobile. Photographer. Gabby Jones/Bloomberg

Uber has agreed to acquire US food delivery group Postmates in a $2.65 billion (€2.34 billion) all-stock takeover anounced on Monday.

“Uber and Postmates have long shared a belief that platforms like ours can power much more than just food delivery – they can be a hugely important part of local commerce and communities, all the more important during crises like Covid-19,” Uber CEO Dara Khosrowshahi said in a statement.

The deal, which is subject to regulatory approvals, is expected to close in the first quarter of 2021. Uber said it is “committed to provide bridge financing to Postmates” as it waits for approvals.

It is not immediately clear what role, if any, Postmates chief executive Bastian Lehmann will take up following the acquisition.

The takeover will help Uber gain ground against privately-held DoorDash, the current market leader in US food delivery. While Postmates hasn’t kept pace with DoorDash, it maintains a strong position in Los Angeles and the American Southwest, both of which could be valuable to Uber Eats.

The move for Postmates comes on the heels of Uber’s failed bid to acquire publicly traded GrubHub, which was scooped up by Europe’s Just Eat Takeaway. com for $7.3 billion. Uber’s board of directors has approved the deal, a person said, though the plans could still be subject to change.

Shares of Uber were up 5% in early trading Monday following the news.

Founded in 2011, Postmates was one of the first to let customers in the US order meal delivery using a mobile app. However, competition has intensified in recent years and Postmates has fallen to a distant fourth.

The company said in February 2019 that it had filed paperwork confidentially for an initial public offering but never went public. It raised private capital last year in a deal that valued the business at $2.4 billion.